The U.S. Navy and Marine Corps fighter components have obtained the certification to refuel from the Italian Air Force Boeing KC-767A tankers.

One of the four Italian Air Force KC-767A aircraft has completed the testing required to certify the U.S. Navy fighter component to perform AAR (Air-to-Air Refueling) operations with the new tanker.

According to the ItAF, the whole operation was completed in 10 weeks, six of those were focused on flight testing with U.S. Navy / U.S. Marine Corps Hornets, Super Hornets, Harriers and Prowlers.

Roughly one year ago, the RSV (Reparto Sperimentale Volo – Italian Flying Test Unit) deployed to the U.S. with the KC-767A to carry out the first certification of a USAF tanker with stereoscopic vision system (Remote Vision System – RVS). Furthermore, in the same period, a KC-767A belonging to 8° Gruppo (Squadron) of the 14° Stormo became the first international tanker to successfully complete aerial refueling of a U.S. Air Force F-35A during a boom receiver certification refueling flight conducted over California’s High Desert region on Jul. 29, 2015.

The KC-767A is a specific variant obtained from the commercial aircraft Boeing 767-200ER “Extended Range.” Equipped with both the sixth generation flying boom (based on the one of the American KC-10), and three hose and drogue stations, the tanker is be able to refuel both aircraft equipped with onboard receptacle and those with a refueling probe. 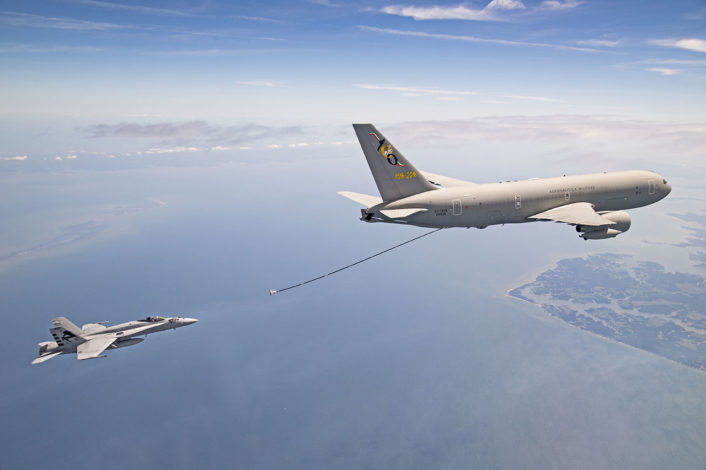 Interestingly, whilst in a KC-135 the “boomer” (as the operator is nicknamed) is prone and moves the flying boom in the receptacle watching the receiver through a rear observation window, in the KC-767 the operators move the boom using a joystick and watching the video from a series of cameras mounted on the tanker’s rear fuselage. The advanced camera system feeds a Remote Vision System that provides high-definition stereoscopic imagery to the vision goggles attached to a sort-of flight helmet worn by the boomer during the air-to-air refueling.

In May 2011, few weeks after being delivered, the KC-767 had its “baptism of fire” in Libya, boosting NATO’s AAR capability by supporting Italian Eurofighter, Tornado IDS and ECR, and AMX involved in Operation Unified Protector.

Since then, the fleet has been certified for refueling with several allies: it supported British Eurofighters to LIMA 13 airshow, conducted collective aerial refueling certification and testing with Gripen and Rafale fighter jets and escorted the Spanish EF-18 and Eurofighter Typhoons to Konya, in Turkey, for Anatolian Eagle 2014-2.

The KC-767A are currently supporting Operation Inherent Resolve, flying under the command of Task Force Air Kuwait, as part of the Italian “Prima Parthica” operation.

Similar to the KC-767A is also the KC-46 Pegasus, a military variant of the Boeing 767 destined to replace the U.S. Air Force fleet of KC-135E Stratotanker refuelers in the coming years. 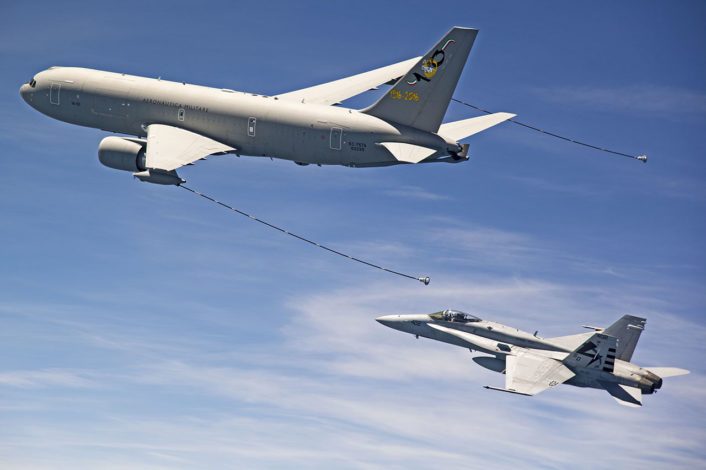 Infographic: how the U.S. top secret stealth drone was captured by Iran

Even if the story that the U.S. stealthy RQ-170 Sentinel drone captured by Iran was hijacked using a GPS spoofing attack is based on known facts and vulnerabilities highlighted in Air Force official documents, the […]