The following video is not only interesting for the stunning footage showing some A-10C Warthog aircraft with 190th Fighter Squadron refueling from a KC-135 but because it shows, from a quite unusual point of view, how the “boomer” (the operator who controls and moves the flying boom) works.

At 00:50 you can see the boom operator lying over the large window located on the tail of the KC-135 aerial refueler and moving the flying boom by means of joystick. 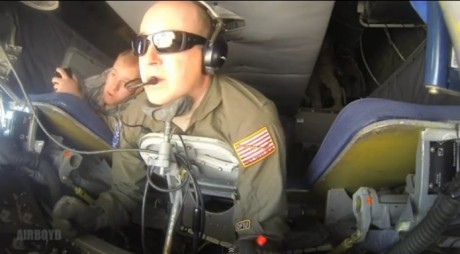 Needless to say, the privileged observation position makes the “boomer” job, one of the most interesting in the Air Force.

10 months of learning how to fly and employ the F-16 at Luke AFB in one stunning video.

Here’s how student pilots train to employ then fly and fight in the Viper. This is an interesting +11 minutes video filmed by pilots attending the F-16 B Course with the 309th Fighting Squadron at […]

This is something you don’t see every day. The MiG-31 Foxhound is a two-seater derivative of the MiG-25. It is a high-speed, high-altitude interceptor, in service since 1983 fielded to counter the B-1B bomber, which […]