While the world diplomatic community debates sanctions against North Korea following the reclusive nation’s underground nuclear test last Tuesday, U.S. Air Force crews are in action over the Sea of Japan, searching for fallout from the explosion.

The WC-135 Constant Phoenix atmospheric collections aircraft is used to detect the radioactive particles that result from a nuclear detonation.

The WC-135 is a derivative of the Boeing C-135 transport and support aircraft. Ten of these aircraft have been operated since 1963, two of which remain in service today. The aircraft are operated by flight crews from the 45th Reconnaissance Squadron from Offutt Air Force Base while mission crews are staffed by Detachment 1 from the Air Force Technical Applications Center.

The WC-135, known as the “sniffer” or “weather bird” by its crews, can carry up to 33 personnel. However, crew compliments are kept to a minimum during mission flights in order to lessen levels of radioactive exposure.

Effluent gasses are gathered by two scoops on the sides of the fuselage, which in turn trap fallout particles on filters. The mission crews have the ability to analyze the fallout residue in real time, helping to confirm the presence of nuclear fallout and possibly determine the characteristics of the warhead involved. 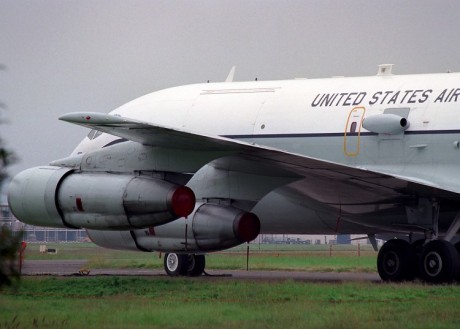 South Korean newspapers reported that WC-135 crews had been operating from Kadena Air Base in Okinawa as early as Jan. 31, 2013 in anticipation of the most recent North Korean Test.

While the underground test likely utilized a series of tunnels, blast doors, and baffles to trap fallout, any radioactive particles that did escape will be useful to analyze the type of warhead and relative sophistication of the design and detonation mechanism.

The sophistication and size of the warhead help analysts determine whether North Korean nuclear technology is advanced enough to build a small warhead that can be delivered by missile.

Thirty Minutes To Choose Your Fighter Jet: How The Shah Of Iran Chose The F-14 Tomcat Over The F-15 Eagle

Why the F-14 Tomcat won over the F-15 Eagle in Iran. Despite all the skepticism about the actual airworthiness of Iran’s new stealth fighter “Qaher 313”, one thing is certain: Iran is still flying the […]

The U.S. Air Force as you know it no longer exists: beginning today, 17 combat units grounded

According to internal documents obtained by Air Force Times, beginning on Apr. 9, 2013, the U.S. Air Force will begin grounding front line combat units as a consequence of sequestration and the need to deal […]