In November 2012, the U.S. Air Forced announced a series of worldwide training deployments to to each of the US combatant command’s areas of responsibility of the stealthy B-2 Spirit bombers.

The “World Spirit Tour”, as the deployment was dubbed by the Air Force Magazine, will bring the first two radar evading planes from the 509th Bomb Wing at Whiteman Air Force Base, Missouri, to the Pacific theater.

Strategically located 1,800 miles (about 2,900 km) to the east of China, Andersen has hosted a deployed strategic bomber force since 2004.

Even if the B-52s and B-1s are regularly deployed there, the B-2s were pulled out ot the rotations to Guam in 2010 (when up to six Spirits were temporary stationed there), after a serious engine fire earlier that year and the loss of another example in a 2008 crash.

With the deployment of the Spirit bombers once again to the Pacific atoll and, probably in the near future, in Australia, where the Air Force has announced “future rotational deployments” of its batwing bombers, the U.S. reaffirms the focus on a region where China’s military power is causing concern to Washington and its local allies, some of those dealing with territorial disputes. 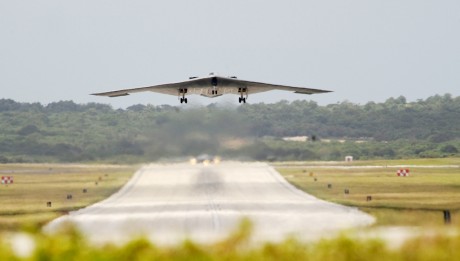 Although they have proved to be able to conduct no-stop round trip strike missions from Whiteman AFB during the Allied Force in Kosovo in 1999 and, more recently, in Libya, during the 2011’s Air War, the Spirit stealth bombers must be able to operate from forward operating bases across the world.

First of all in the Asia-Pacific region, and then in Central and South America, Southwest Asia, and Europe, where there are no permanently assiged bombers.

It must be remembered that the B-2 is the only platform capable to deliver the Massive Ordnance Penetrator 30,000lb bomb. Capable to destroy bunkers in Syria, Iran. Or North Korea, not far from Guam either…

In the late 1960s, CIA, U.S. Air Force, Navy and several other agencies were involved in highly classified programs whose purpose was to evaluate MiG fighter jets and study the best ways to face them […]

Are you able to ID the pod carried by these two “Vipers” flying at low altitude through the Jedi Transition recently? Few days ago we have published the photographs of an Area 51-based F-16D (86-0052) […]

The “OC Air Show” was a stunning success for those starved of air show entertainment. It was also the first timefour Air Force demonstration teams took part in the same show Taking place over the […]