Several news agencies are reporting that the British Ministry of Defense is considering deploying Eurofighter Typhoons to Al Dhafra airbase, in the United Arab Emirates, on a long term basis.

The British Newspaper The Independent ran an article quoting MOD sources as saying that the aircraft not only are to deploy to the region, but could be part funded by the UAE themselves.

The French Air Force already have a presence at the base and that presence is funded by the UAE and is also home to the 380th Air Expeditionary Wing of the U.S. Air Force with jets (including the stealthy F-22 Raptor) and Patriot missile batteries.

The Typhoons could be used to protect the Strait of Hormuz, should the Iranians decide to blockade the strategically important bottle neck for 40% of the worlds oil, should they come under attack.

However the official line from the Ministry of Defense in London came in the form of a press release which said: “The UK regularly deploys Typhoon to UAE as part of our routine exercise programme and to demonstrate our military commitment to UAE and the security of the wider region. We have a mutual interest with our GCC [Gulf] partners in ensuring peace and stability in the region, and exercises such as this allow us to practice working together.”

The MoD added: “These deployments are not due to our concerns over Iran’s nuclear programme. As we continue to make clear, the Government does not believe military action against Iran is the right course of action at this time, although no option is off the table.” 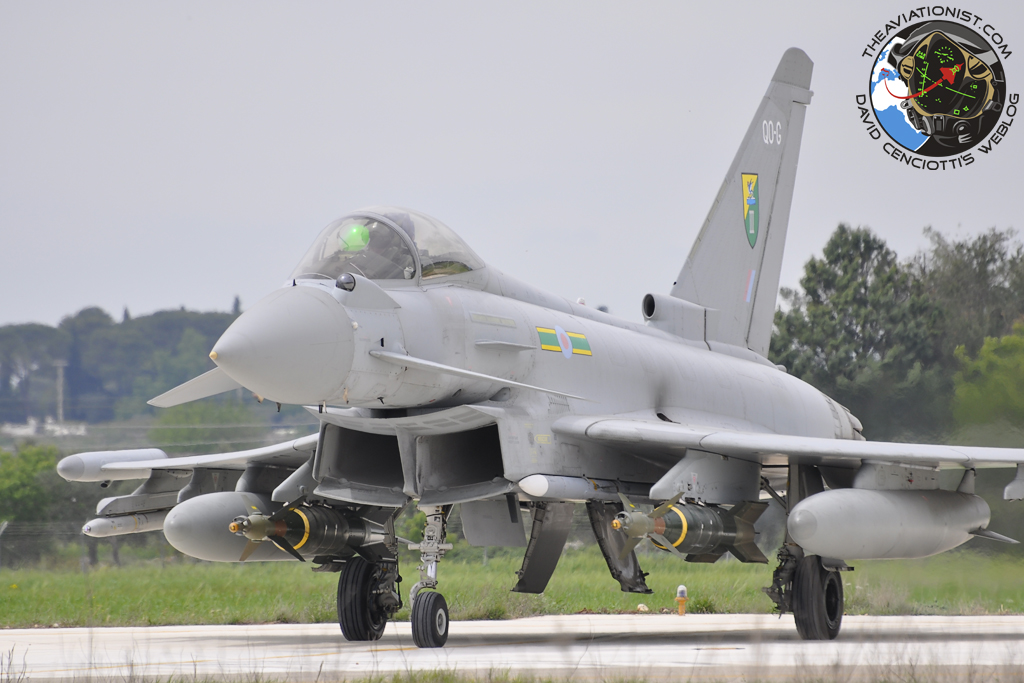 Although its clear the decision hasn’t been made, in public at least, it does look with the funding possibly sorted that this will come about.

It may just be a case of timing the announcement, as it happens British Prime Minsiter David Cameron is currently in Dubai trying to drum up trade for British defense contractors and Eurofighter; it could be announced whilst Cameron is in the area and be a bit of a deal sweetener for sales of Eurofighter jets to UAE.

Have you ever seen a picture of a fighter plane towing a radar decoy? Here it is

Towed decoy systems are used to protect military aircraft from radar-guided missiles. These countermeasures are towed behind the host aircraft protecting it against both surface-to-air and air-to-air missiles. They provide a radiowave reflecting bait that […]

The tradition lives on. The 18° Gruppo (Squadron) of the Aeronautica Militare (Italian Air Force) has had checkered tails on its aircraft since the unit flew the F-104 Starfighter, out of Trapani Birgi Air Base, […]