This post is addressed to the many visitors of this site who repair, restore or simply collect old instruments like altimeters, turn and slip indicator, compasses, etc. However, former pilots and current airliners crew and frequent flyers could find something interesting in this article. Here’s the reason why.

A friend of mine, who’s keen on aviation, recently bought on eBay an old ADI (Attitude Indicator). This friend has also a small Geiger counter that he uses to inspect all the items he receives from abroad because he was taught nuclear physics at school. His Geiger counter is able to detect alpha and bravo particles, and gamma rays. He neared the counter to the glass of the instrument and got no audible tone (the Geiger counter has a gas-filled tube that conducts electricity when a particle or photon of radiation makes the gas conductive. The tube amplifies this conduction and outputs a current pulse, which is heard as a “click”; if you hear a click every now and then, you should not worry but if clicks become frequent it means you are near a radioactive source).

My friend opened the instrument in order to clean it and when he used the counter again to detect radiation, to his surprise, he heard multiple frequent clicks, meaning that the portable device was next to “something” emitting either radioactive particles or rays. Since he previously hadn’t detected anything (when the instrument was closed) he was sure that alpha particles were causing that large amout of “clicks”, since alpha particles may be completely stopped by a sheet of paper (in his case, by the glass of the instruments), beta particles by aluminum shielding while gamma rays can’t be stopped and can penetrate deeply unless stopped by a thick layer of lead.

With the same procedure, but without removing any glass, the Geiger counter found gamma radiation being emitted by another instrumment.

Following the discovery of radiactivity in normal flight instruments we started an extensive search on the Internet and found that most instruments made up until 1960s had the luminous paint, needed to read them at night, based on Radium. The Radium is one of the most radioactive chemical elements (symbol Ra and atomic number 88), 1000 times more radioactive than Uranium. Its most stable isotope, Ra-226, has a half-life of 1602 years and decays into radon gas. This means th 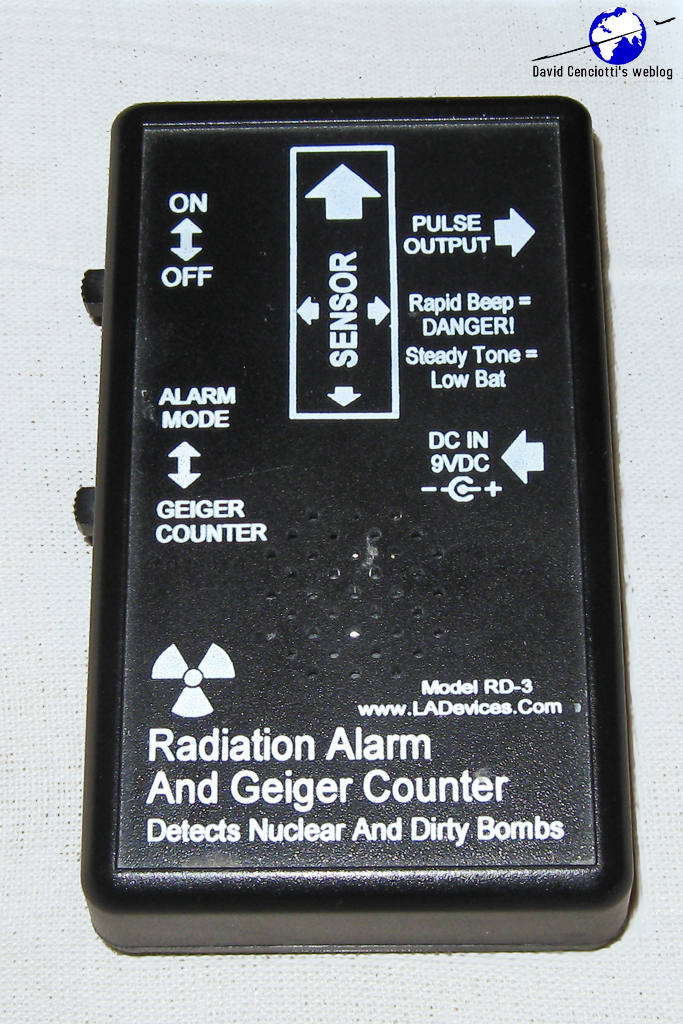 at a 70 years old instrument is still well active and will be for the next thousands years. The radiation can be sufficiently penetrating to break chemical bonds which are essential to the structure and function of living tissue possibly causing (depending on the intensity and duration of the exposure) serious health problems. The danger is actually less in radiation than in the ingestion of the contaminated dust that accumulates behind the instrument’s glass as the intensity decreases with the square of the distance from the source. 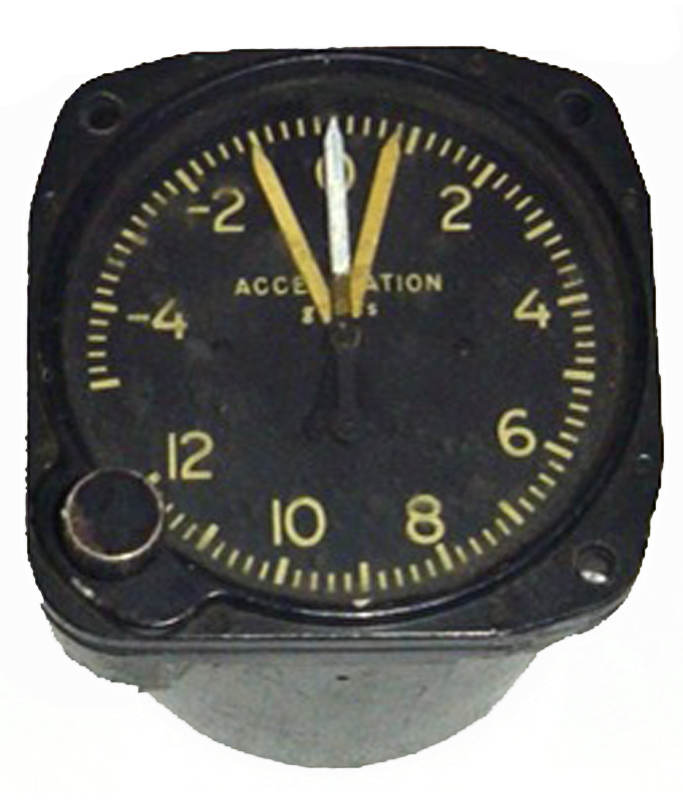 Dealing with the external radiations, if the amount of Radium used to create fluorescent dials is small, the radiation should not be so intense. Consequently if you keep the object far enough (some meters) from where you live, sleep and spend most of the day, you should not have serious problems in the long term because of that nice instrument you have on your bookcase. However, as said, that depends from the amount of radioactive material contained in the instrument and the distance between you and the source. Obviously, if you collect WWII compasses and altimeters, it is better to check the intensity of radiation and to keep them away from your bed! Various sources available on the Internet can provide much more details on the gamma radiation risk. You can find interesting websites where the dose of radiation absorbed by some of these instruments (especially compasses) was measured at different distances (on contact, at 30 cm, at 1 meter, etc.). 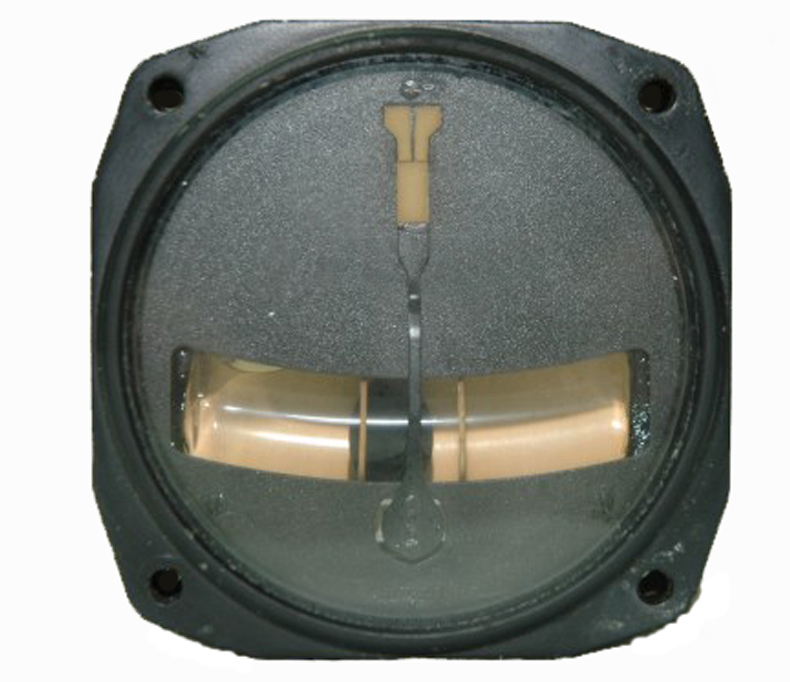 For what concerns the internal radiation, if all the Radium in the instrument remains behind the glass (and this one is sealed and intact) alpha particles will not be able to penetrate the glass and Radium dust will have little chances of being inhaled or ingested. Instead, if you want to repair or restore the instrument, you must be aware that you are going to handle Radium powder that could spread in your room for you to breath or that you can have on your gloves and cloths and thus easy to be ingested. Just to understand how dangerous alpha particles could be for our body, read the following statement taken from Wikipedia: “Because of this high mass and strong absorption, if alpha emitting radionuclides do enter the body (if the radioactive material has been inhaled or ingested), alpha radiation is the most destructive form of ionizing radiation. It is the most strongly ionizing, and with large enough doses can cause any or all of the symptoms of radiation poisoning. It is estimated that chromosome damage from alpha particles is about 100 times greater than that caused by an equivalent amount of other radiation”.

If you want to open the instruments (for example, to restore them and put them in a cockpit) you should adhere to the following precautions:

You can work safely around radiation and/or contamination by following a few simple precautions:

1. Use time, distance, shielding, and containment to reduce exposure.

4. Wear protective clothing that, if contaminated, can be removed.

5. Wash with nonabrasive soap and water any part of the body that may have come in contact with the contamination.

6. Assume that all materials, equipment, and personnel that came in contact with the contamination are contaminated. Radiological monitoring is recommended before leaving the scene. 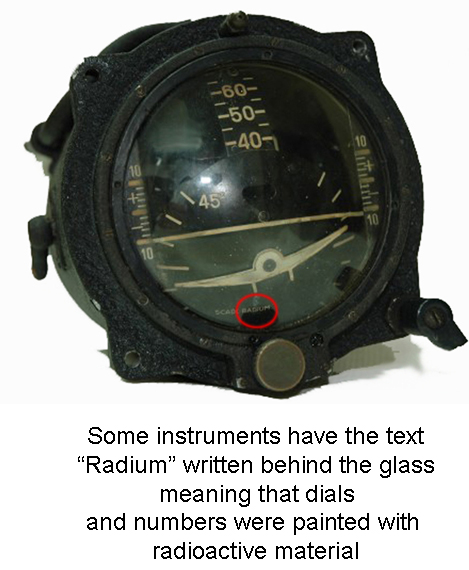 The Swiss Armed Forces issued an interesting document (in Italian language) explaining the risk associated with Radium and providing a list of the historical military equipment that could contain Radium:

Beware, Radium can still be found on many consumer product as explained in the following Health Physics Society document: http://www.hps.org/documents/consumerproducts.pdf

After explaining the risk of handling radioactive material, let’s explain some other things that may help to you fully understand the actual entity of the problem.

The absorbed radiation dose is measure in millirem, mrem.

Consider that (taken from the Idaho Department of Environmental Quality website: http://www.deq.state.id.us/inl_oversight/radiation/radiation_guide.cfm):

– Average Dose to US public from all sources 360 mrem/year

Foods that are rich in potassium, like fruits, beans and lentils, vegetables, and some whole grains, expose us to radiation as potassium decays. The food we eat exposes us to about 40 millirem of radiation each year.

If you live near a nuclear power plant, you’ll receive about .009 millirem of radiation each year.

An x-ray machine uses radiation to look inside your body. Your dose depends on what part of your body is x-rayed, how many are taken, and the condition of the x-ray machine. A dental x-ray can expose you to levels as low as 2 to 3 millirem or as high as 25-35 millirem.

Smoking 1½ packs a day can result in exposure to 1,300 millirem of radiation per year. Tobacco has a high concentration of polonium-210, a naturally occurring radioactive element.

Flying in an airplane reduces the thickness of atmosphere shielding you from cosmic sources of radiation, including our sun and cosmic rays. You receive about 1 millirem of radiation for each 1,000 miles you fly. A member of an airline crew receives about 200 millirem a year on the job. According to the Health Physics Society: “Pilots flying high-altitude, high-latitude routes do receive exposures that put them in the top five percent of all radiation workers when ranked by dose.”

Not only the flight instruments produced in the first half of the 20th Century have Radium dials. Many clocks had dials made visible at night with Radium. The dose of gamma radiation generated by these clocks (worn as up as 16 hours per day) is estimated on the whole body to be around 7 to 9 mrem/year. This is a value that should be comparable to the dose received by gamma radiation emitted by a turn and bank indicator (not in contact with the body). Thus the radiation caused by an instrument could be less than the dose of radiation absorbed by the food we eat.

At the following address (if you live in the US) you can calculate your average annual exposure: http://www.epa.gov/rpdweb00/understand/calculate.html.

I’m not an expert of this matter but I’m sure you now have at least more details to understand the risk associated with handling an instrument containing Radium and choose what to do with it.