According to the Associated Press, the U.S. Air Force has launched a six-year plan to more than triple the airspace used for its bombers to accomodate more training sorties of its Dakotas-based B-1 and B-52 planes.

A final environmental impact review is being finalized but talks with American Indian tribes (and the Federal Aviation Administration) have already begun.

The purpose of such discussion is to reach an agreement that “would legally bind the Air Force with commitments to avoid, minimize, and mitigate adverse effects to historic properties.”

The current training area, dubbed the Powder River Training Complex, is centered few miles to the northwest of where South Dakota, Wyoming and Montana meet.

In spite of being about 8,300 square miles airspace, it can accomodate only one or two B-1B Lancers from Ellsworth AFB, SD, or B-52 Stratofortress bombers from Minot AFB, ND, at one time. For this reasons aircraft have to fly their combat training sorties, which include practice firing runs as well as defensive maneuvers, have to fly to military operation areas (MOAs) located in Nevada or Utah.

Even if flying some thousand miles away from their homebase should not be a problem for both “Bones” and “Buffs”, able to perform Global Strike round-the-globe missions, with the new plan, three new MOAs will be added to the current one, thus creating an airspace larger than West Virginia, about 27,500 square miles, nearer to their stateside airbases. 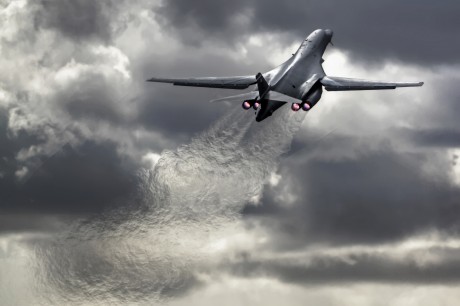 Within the large airspace the heavy bombers will be allowed to fly at low level, release bombs and deploy chaff and flares.

Not only American Indians worry about the Air Force plan: ranchers are afraid military activity could terrify their livestock.

No, They Probably Weren’t Secret Navy SEALS in the President’s Christmas Video.

Mainstream Media Caught in Case of Mistaken Identity in Christmas Twitter Video. News stories around the world on Thursday, Dec. 27, 2018 reported that the U.S. President “… may have revealed the location of SEAL […]

Nicknamed “Disco” or “Symbiote” F-22, the new Raptor with a reflective coating has been one of the highlights for the photographers gathered outside Nellis Air Force Base for Red Flag 22-2. A second F-22 with […]