Taken on the day of the alleged Mayan Apocalypse Dec. 21, 2012, the following cool photo shows pilots preparing the cockpit of a U.S. Air Force T-38 Talon jet at Beale Air Force Base, California.

The supersonic jet trainers are used for training of U-2 pilots since they have similar flight controls (and lower operating costs than the “Dragon Lady”). 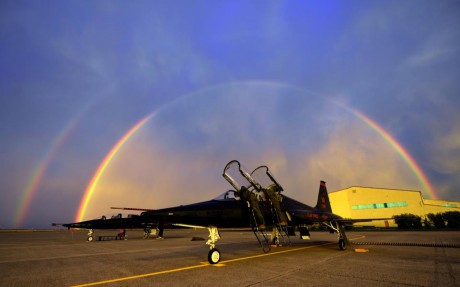 The B-2 Spirit was part of the first-of-its-kind trifecta flyover during the National Anthem performance at the LV Super Bowl. As you already know by now, the Super Bowl LV, in Tampa, Florida, saw a […]

That Time A B-47 Pilot Got Rid Of A Nuclear Bomb Near Savannah, Georgia

The story of another nuclear weapon unaccounted for in the U.S. There have been a lot of articles about the famous collision of a B-47 carrying a nuclear bomb, with a F-86 over the skies […]