Up to eight F-15 jets were scramble by the JASDF (Japan Air Self Defense Force) in the morning of Dec. 13 (02.00 GMT – 11.00 LT), after a Chinese Harbin Y-12 maritime surveillance aircraft skirted one of the disputed islands in the East China Sea.

Accompanied by an E-2 Hawkeye Airborne Early Warning platform, the Japanese “armada” responded to what is the first Chinese incursion into Japan’s airspace near Senkaku islands (that China calls Diaoyu), since Chinese warships have started moving in and out of waters around the islands.

According to China’s State Oceaninc Administration, the unarmed Y-12 (carrying registration B-3837) entered the airspace over the island to join a routing patrol with four surveillance vessels.

“During the patrol, the fleet declared the Chinese government’s stance regarding the Diaoyu Islands to Japanese ships that had illegally entered the waters and asked them to leave the waters,” according to the China Daily news. 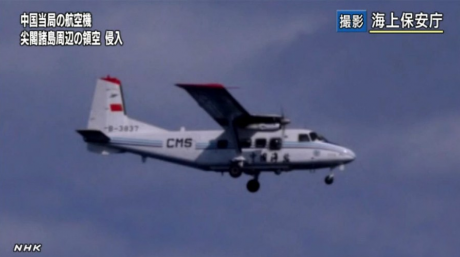