A quite unusual accident occurred on board USS Truman in the Virginia Capes, where the supercarrier is involved in CARQUAL (Carrier Qualification) activity.

A source who talked to NavyTimes revealed that two Hawkeyes on the flight deck, chocked and chained with their wings folded up, hit each other. The accident occurred as one of the wings on an E-2 hit the other’s nearby propeller for unknown reasons. No one was hurt as no one was on board either plane but it’s unclear whether the aircraft are airworthy.

For sure, recent images of the Truman at sea involved in the onboard testing of the X-47B unmanned combat air system (UCAS) demonstrator, show an almost empty flight deck, with no E-2.

X-47B’s testing schedule was not affected by the mishap according to the source contacted by the Navy Times. 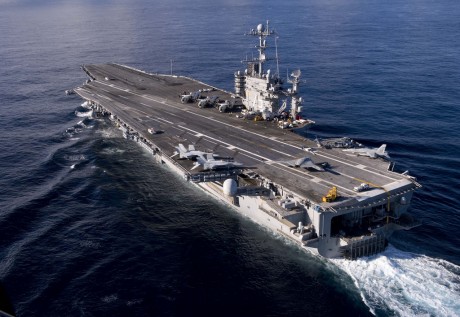 What’s weird is an uncommanded wing unfold. Aircraft designed to operate on aircraft carriers have a fold/unfold system which uses on hydraulic cylinders in each wing to move wing sections and save space on the flight deck.

Hydraulic pressure in the cylinders and safety pins should prevent uncommanded wing fold/unfold.

This video was recorded on USS Theodore Roosevelt on Sept. 14, 2003. The flattop found itself in a extremely bad weather and heavy rainfall in the middle of a recovery: sevaral planes had to land […]