Hence, as China greeted the first successful landing on a combat plane on its Liaoning aircraft carrier, the U.S. Navy has made another significant step toward the future integration of drones on the carrier deck.

A step that will make naval aviators as we know it no longer sitting in the cockpit of an embarked plane but piloting killer unmanned planes from a more comfortable chair inside a ground control station.

Ground-based cat launches and recoveries will continue in the future at Pax River before the X-47B embarks on USS Harry S. Truman (CVN 75) later this month for its initial sea trials.

First carrier-based launches and recoveries by an autonomous, unmanned aircraft are expected in 2013. 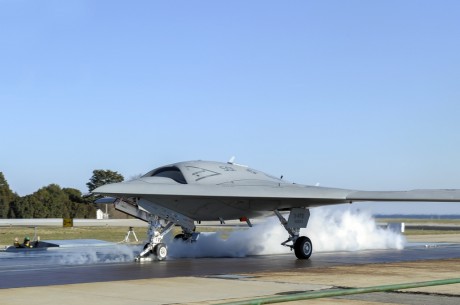 U.S. aircraft carrier launched strikes against Daesh from Mediterranean for the first time

You won’t believe this is NOT an F-117 Nighthawk stealth jet!

From a certain angle, the nEUROn drone is  an F-117 look-alike. The image in this post was taken by The Aviationist’s contributor Roberto Zanda on Apr. 21. It shows the first example of the nEUROn […]