Until a photo with an interesting caption appeared on the November 2012 issue of Air Force Magazine, few people had noticed that an F-35 display model at the Air Force Association Technology Expo 2012, had its weapon bays loaded with a brand new type of air-to-air missile: the Lockheed Martin “Cuda”. 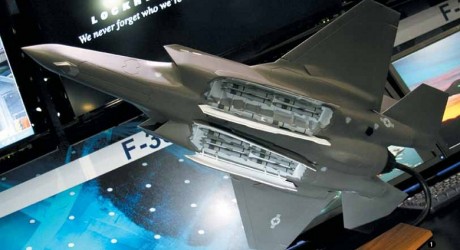 “A Lockheed Martin model shows how its “’Cuda” concept for a small AMRAAM-class radar guided dogfight missile could triple the air-to-air internal loadout on an F-35. The missile is about the size of a Small Diameter Bomb and fits on an SDB-style rack.”

Photo caption aside, almost nothing is known about the “Cuda” missile.

“We are having some challenges getting information on Cuda cleared for public release,” Cheryl Amerine, Cuda POC at the Lockheed Martin Missiles and Fire Control, told The Aviationist.

“Cuda is a Lockheed Martin multi-role Hit-to-Kill (HTK) missile concept.  Lockheed Martin has discussed the missile concept with the United States Air Force. The Cuda concept significantly increases the internal carriage capacity for 5th generation fighters (provides 2X to 3X capacity).  Combat proven HTK  technology has been in the US Army for over a decade.  Bringing this proven HTK technology to the USAF will provide potentially transformational new capabilities and options for new CONOPS.”

The Hit-to-Kill missile technology Lockheed is designing for the USAF is still classified and some of the capabilities of the Cuda missile are being reviewed for public release. Still, something can be said based on the few details available.

First of all, the F-35 will carry kinetic energy interceptors: “hit-to-kill” weapons rely on the kinetic energy of the impact to destroy their target. That’s why some HTK missiles don’t carry any warhead (others use a lethality enhancer warhead).

HTK technologies can be used for missile defense (Scuds, rockets or even ballistic missiles). Is someone at the Pentagon studying the possibilty to use F-35s carrying clusters of Cudas as aerial anti-missile systems to intercept small rockets, SAMs (surface-to-air missiles)?

Second, that unlike Sidewinders, Cuda missiles, rather than being equipped with an IIR (Imaging Infra Red) seeker, will be radar-guided. This means they will be ejected from the internal bays in such a way the exposure of the stealth plane is reduced.

Third, the possible integration of the Cuda with the F-22: since a Raptor can carry eight SDB, it can theoretically carry up to eight Cuda, even if the perfect air-to-air loadout could be mix of AIM-120 AMRAAM, AIM-9X and Cuda missiles.

Real World Capability Aside, Which Country Puts on The Best Gen. 5 Demonstration? Military aviation fans and spotters can’t have a conversation about Russian and American aircraft without making comparisons. Whether it is the dogma […]

Some F-117s have already taken the road to the scrapyard, others continue flying. Enjoy your Black Friday with a Black Jet story. As already reported, an F-117 Nighthawk was spotted on a trailer on US-95, […]