Although it’s still decades away from achieving a combat capability comparable to that of the U.S. Navy, China’s People Liberation Army Navy is trying to fill the gap quite quickly.

According to Alert5, the first arrested landing on Liaoning took place on Oct. 21 with a J-15 piloted by a China Flight Test Establishment pilot.

Purchased in 1998, the Kutznesov Class 60,000 ton aircraft carrier, previously named “Varyag”, will be used to test qualify Chinese pilots flying with the navalised J-15 as well as to test and validate procedures, equipments for another future operative aircraft carrier (expected no sooner than 2020).

Hence, not only China is currently the only country known to be developing two stealth fighters simultaneously (the J-20 and the J-31) but the successful landings on Liaoning have put its Navy on track for a future role as a maritime power capable to pose a threat to the U.S. naval forces in the Asia-Pacific theatre. 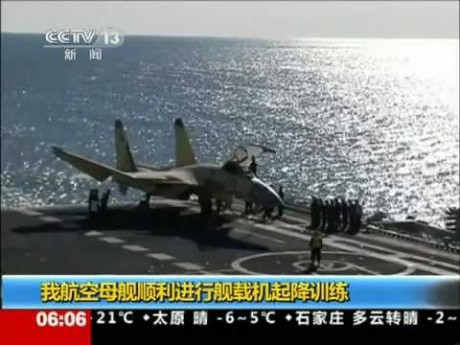 The following video shows what approaching, landing and parking onboard a U.S. Navy aircraft carrier looks like from the cockpit of a C-2 Greyhound COD (Carrier Onboard Delivery) plane. The interesting footage was filmed with […]

Aircraft carriers, stealth fighter bombers, biplane cargos, submarines and a lot of never seen before weapons systems: this is the fictional world created (or at least collected, since I’m not sure he did all of […]