Departing RAAF Base Richmond the two aircraft, one with a special yellow sunset tail paint scheme, formed a loose formation and flew along Sydney’s southern beaches at a reported altitude of 150 metres.

Separated by 600 meters, the two Herkys then orbited the Sydney harbour area for 20 minutes before departing to the North and the town of Barrenjoey, where they headed west to the Blue Mountains before returning to base. 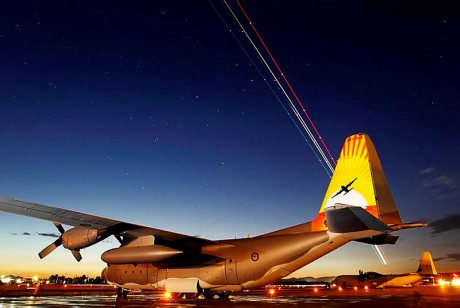 Another C-130H visited regional areas with a touch-and-go and overflight of the runways at Lake Cargelligo, Gilgandra, Tamworth at 4.30pm and Walcha.

The RAAF will retire the type for good on Nov. 30 and will bring down the curtain on a service record that has lasted since 1978 and has seen the type in hot spots all over the world.

Three Times as Many Thumbs Down to “Wear My Medals on The Left” As Thumbs Up. On Nov. 6, 2018, the Australian War Memorial posted a music video on YouTube by the choral group, “Sisters […]

The new digitally engineered Boeing Loyal Wingman UAV went from design to the first flight in just three years. Boeing and the Royal Australian Air Force (RAAF) announced on March 1, 2021, that the Loyal […]