The appearance of the new J-20 (unofficially dubbed “Black Eagle”) raised many questions about the Chinese stealth fighter. Some experts think it will be more capable than the F-22; others (and I’m among these ones) think that the real problem for the US with the J-20 is not with the aircraft’s performance, equipment and capabilities (even if the US legacy fighters were designed 20 years earlier than current Chinese or Russian fighters of the same “class”); the problem is that China will probably build thousands of them.

Anyway, comparing the US and Chinese fighters, everybody referred to “fifth generation planes” bringing once again the concept of “fighter generation” under the spotlight.

Generations are a common way to classify jet fighters. Often, generations have been “assigned” to fighters in accordance with the timeframes encompassing the peak period of service entry for such aircraft.

The best definition I’ve found so far of fighter generations is the one contained in an article published in 2009 by Air Force Magazine, that proposes a generations breakdown based on capabilities:

In order to give the readers a rough idea of the type of aircraft belonging to each generation based on the above breakdown I’ve prepared the following table with the help of Tom Cooper / ACIG.org and Ugo Crisponi / Aviatiographic.com, who provided the profiles. It’s not meant to show all the aircraft theoretically belonging to a generation and includes only the profiles available at the time of writing… 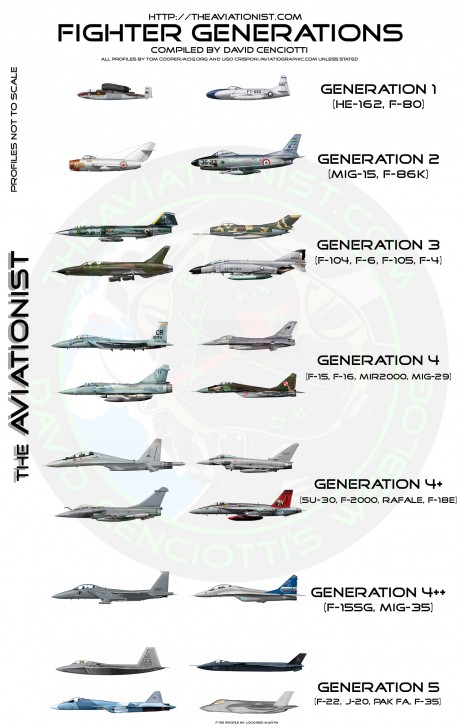 As I’ve already said on Twitter, what such a table should let you understand at a glance is that capabilities and appearance are inversely proportional: former generations aircraft look much better than more modern fighters…..