When I landed in Tampa in 2005 I couldn’t imagine that the runway 18 that was used our Song Airlines B757 would be renumbered in a matter of a few years. All around the world, runways are labeled and designated by a number between 01 and 36, which is generally one tenth of the magnetic azimuth of the runway’s heading: a runway pointing to the north will be numbered 36, a runway pointing to the south (or 180°) will be numbered 18, a runway pointing to the east (90°) will be numbered 09, and so on. When Tampa International Airport opened in 1971, its primary runway pointed more or less to the north, so it was labeled 36 on the southern end and with label 18 on the opposing direction (each runway has two labels, normally differing by 18, from 180°, since it can be used in both directions). However, in the last 40 years the magnetic pole has moved some 40 miles per year towards Russia and today the runway points closer to 010° e to 190°, meaning that the two thresholds will have to be renumbered respectively RWY01 and RWY19. Something similar could happen to Atlanta runways soon. 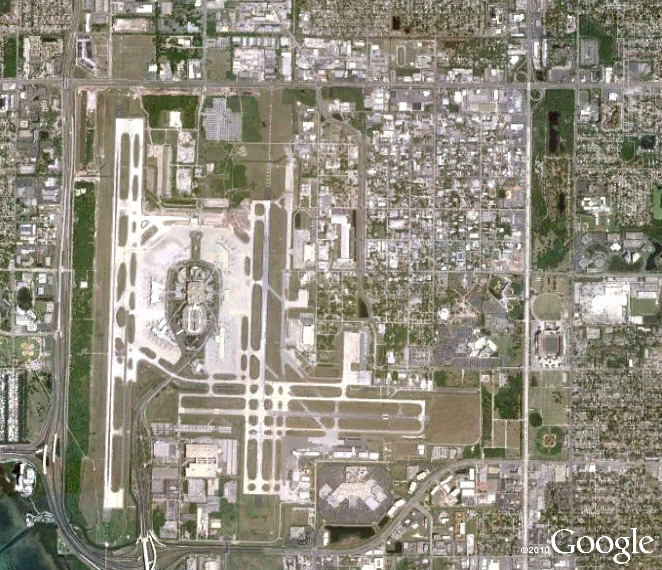 In fact the Earth’s magnetic pole is shifting relatively quickly across the top of the planet: 400 years ago, when recordkeeping began 400 years ago, the Magnetic north was located below northern Canada, while in the last 100 years it moved fast towards Siberia. According to Joe Stoner, a geophysics professor at Oregon State University interviewed by the St. Petersburg Times “scientists don’t know exactly why the pole shifts, but it’s affected by the movement of the Earth’s liquid outer core around the solid inner core. Scientists also aren’t certain about where the pole will go next. Stoner predicted it will slow down over the next few decades as it crosses the geographic north pole, and then speed up again as it heads toward Russia”. Since changing a runway designation doesn’t simply imply the need to write the new labels on the both ends of it as a lot of official documents must be updated (an operation that takes some time), Stoner’s predictions sounds reassuring for FAA and airport’s official: at least, such a change will not be necessary again for at least a few decades to come. While aircraft have other equipment to rely on (GPS, ILS and so on), those animals that perceive the magnetic field and orient themselves or migrate using it can suffer a lot of a change in Earth’s magnetic pole: some experts think that the recent mysterious death of birds and fishes all around the world, might be linked to their inability to navigate along the usual corridors caused by a sudden change in Earth’s magnetic field.

The below image, from the Natural Resources Canada website, shows the position of the north magnetic pole in 2001.