More than the anticipated North Korea’s missile route over East China Sea, what seems to worry a lot the Japan Defense Ministry is the possibility that its ships fitted Long Range Surveillance and Tracking (LRST) systems, deployed to monitor the launch, could be approached by Russian or Chinese intelligence-gathering aircraft.

According to the Daily Yomiuri online, the ministry will use its Maritime Self-Defense Force destroyers, equipped with Aegis Ballistic Missile Defense System, to track the missile as it will skirt the Japanese islands of Miyakojima, Ishigakijima and Okinawa (where a large U.S. airbase, Kadena, is located).

Two vessels will be deployed in the East China Sea, while another one will cruise in the Sea of Japan.

Since these Japanese vessels, with Ballistic Missile Defense capabilities similar to those of the U.S. Navy Ticonderoga class cruisers and Arleigh Burke class destroyers equipped with LRST systems, will have their radar sensors pointed towards the missile, they could remain partially defenseless, with their crews concentrating on missile’s detection and tracking.

The Japanese MoD fears that Russia and China’s spyplane could exploit the opportunity to come close to the JMSDF ships, to try to gather some interesting data about the way these vessels are equipped or operate.

For this reason F-15J fighters will provide cover to the Aegis destroyers, patrolling the nearby airspace and intercept any enemy plane with suspect behaviour.

As highlighted by the Daily Yomiuri article this will be the first application of the provision.

Surely Naha, located on the Okinawa island, will be the main operating base of the F-15. However such operation, involving two planes, spares, aerial refuelers and various support assets, will probably involve other airbases whose QRA (Quick Reaction Alert) cells could be kept in a heighned readiness status, such as Nyutabaru, Tsuiki and Chitose, in the north of the country.

The Daily Yomiuri article suggests that spyplanes approaching within about 36 km of a Japanese vessel will be issued a warning to prevent futher approach even if the Ministry of Defense could have issued new, specific Rules Of Engagement, allowing the F-15Js to fire warning shots if aircraft ignore the warnings.

To be honest I think that in most cases warning shorts are considered useless as nobody would see them, but I might be wrong. For sure intercept procedures foresee that the intercepted plane complies with the fighter instructions. If it doesn’t it will be shot down.

Even if Russian strategic bombers, reconnaissance planes and AWACS skirt Japanese islands (and get photographed) during long range patrol flights quite often, such special measures to protect the Aegis ships seems a bit exagerated.

Two Russian Il-38 reconnaissance planes have been intercepted in the last days. Many spyplanes (including U.S. one) will be probably wandering in international airspace in the next 24 – 48 hours, but their main interest will be the North Korean missile.

Unless the Japanese destroyers have been equipped with new equipment that has to be kept secret. Otherwise, I would concentrate my force in detecting and tracking the missile and shoot it down if it gets too close. 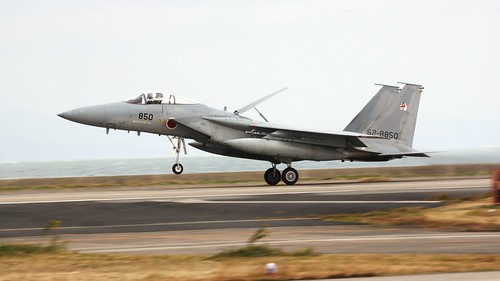 No traces of radioactive materials, including xenon gas, were detected following North Korea’s latest nuclear test. Here are the aircraft that helped determining that. On Sunday Aug. 3, North Korea conducted its sixth and most […]

The WC-135C “nuke hunter” has deployed to Okinawa amid raising nuclear tensions with Pyongyang. The U.S. Air Force WC-135C Constant Phoenix Nuclear explosion “sniffer” has arrived in Japan. The aircraft was deployed to Kadena Air […]

Bizarre Video Continues North Korean Saber Rattling, Appears Comical. In the strange style of propaganda videos released by the Democratic People’s Republic of Korea, a new clip posted to YouTube ahead of the latest North […]