DJIBOUTI – The shipping lanes of the pirate-infested Somali basin have faded somewhat from the headlines in the past year as attacks and successful hijackings have dropped significantly.  The decrease is due in part to the continued efforts of several coalition air forces to patrol the Indian Ocean and Gulf of Aden in a continuous, coordinated way.

The Aviationist took an in-depth look at the forces and methods involved to help fight piracy from the air.

The former French Foreign Legion outpost in Djibouti has become a hotbed of military activity as Western forces have waged a protracted but largely secret campaign against extremists in the hinterlands of Somalia, Yemen, and the waters off East Africa.  Predator and Reaper drones fly daily from the base, striking targets in restive northern Yemen and Southern Somalia.  The airbase is also home to a contingent of maritime patrol aircraft from a variety of nations. 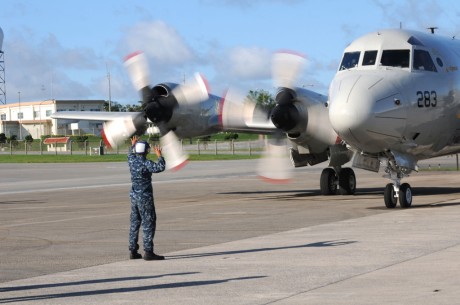 Since the early 2000’s, Djibouti has hosted P-3 Orion patrol aircraft from the U.S. Navy (USN), Spanish Air Force, and German Navy.  In 2009, Japan Maritime Self Defense Force (JMSDF) Orion crews made history when they began the nation’s first deployment abroad since the end of World War II.  While the humanitarian aspect of anti-piracy operations blunt some criticism, the reality of the JMSDF deploying aircraft far from home is not lost on either Japanese nationalists, yearning for a return of an assertive, interventionist military, or critics of the nation’s conduct half a century ago.  In 2010, Singapore marked a first when it deployed Fokker F-50 patrol aircraft, following the hijacking of a Singaporean cargo ship.

The P-3’s fly daily from Djibouti, working in concert with a task-force of warships from multiple nations to provide over-watch and real-time updates on the position of suspected pirate vessels.  The geography and lack of assets are challenges for the naval task force.  As countermeasures have increased and pirates have gained experience, aggressive captains have pushed out further and further from their home waters in hopes of hijacking a vulnerable cargo ship and earning a hefty ransom.  In recent years, attacks have been recorded as far as 800 nautical miles off the Somali coast.  The distances and areas involved demand close coordination between all aircraft and ships involved.

While military spokesmen declined to comment, observers have noted that the Orions fly their anti-piracy sorties unarmed.  The aircrews rely on information to neutralize the threat of piracy, rather than escalating the situation with weapons.  While counter-intuitive, understanding the motives of pirate crews helps to explain the desire to deescalate a potentially deadly situation.  The goal of Somali pirate crews is to board a relatively helpless cargo ship, overpower the crew, and steam as rapidly as possible towards the Somali coast.  Once the ship is near the coast, the crewmembers are brought ashore, taken inland and hidden, to prevent a rescue attempt.  The owners of the ship are then contacted and negotiations begin to ransom both the ship and the crew.  The vast majority of hijackings end with the crew and vessel returned safely to their owners following a ransom payment.  Any attempt by military forces to stage a rescue or use violence against the pirates ultimately imperils the crew and other hostages.

With weapons removed from the playing field, aircrews use surveillance equipment and simple physics to their advantage.  The crews aim first to identify suspected pirate vessels and warn nearby merchant ships to alter course.  Somali pirates use medium sized fishing dhows as “motherships”, allowing them to sail far out to sea and lie in wait for weeks on end.  When the mothership notices a cargo ship approaching, several small skiffs are launched.  These speedboats are quick, but cannot sail far or handle heavy seas.  As a result, in order to catch a cargo ship, the mothership has to effectively be out in front of the target.  A merchant ship steaming at 20 knots can use its speed advantage to disengage and prevent the mothership from getting close enough to launch her skiffs, if given enough warning to change course and disrupt the engagement.

The challenge of differentiating motherships from innocent fishermen is made a bit easier by visual clues used to spot potential pirates.  Skiffs on the deck, extra cans of gas, and boarding ladders are simple signs that a dhow is probably on the look-out for something other than fish.  A fishing dhow cruising the Indian Ocean shipping lanes without any nets is also an easy signal that trouble is in store.  Orion crews take note of suspected pirate motherships and broadcast warning messages to merchant ships in the area.

USN Orion crews have been involved in several high-profile piracy incidents, including the hijacking of the M/V Maersk Alabama and dramatic rescue of her captain in April 2009.  A P-3C from USN VP-8 was the first aircraft or ship on the scene following the hijacking.  VP-8 crews provided surveillance during the negotiations and were overhead sending real-time imagery to commanders during the attack that lead to the death of the remaining pirates and the rescue of Capt. Richard Phillips.  USN Orions also provided support following the hijacking of the sailing vessel Quest in Feb. 2011.  Sadly, the crew of the Quest was killed by hijackers before negotiations could be successfully completed.

While attacks and hijackings have decreased, the patrol plane presence has not.  The JMSDF is currently building a hanger and support facilities to allow a continuous detachment to operate from the Djibouti-Ambouli airfield.  Likewise, western naval forces show no signs of departing from this strategically located African base.

Boeing’s MQ-25 unmanned aircraft system has been unveiled. After teasing its shape with a mysterious tweet that included a photograph of an aircraft under protective cover on Dec. 14, as planned, Boeing has unveiled a […]

Here’s a cool GoPro video showing the final check of an F/A-18C Hornet right before catapult launch. An interesting footage, shot by a “white shirt” on the flight deck of USS George H. W. Bush, […]