It is not a secret that modern military heavily relies on digital systems.

Just have a look at the cockpit of a fighter jet, bomber or helicopter (even if the same is for warships, tanks, etc.) and you’ll be struck by the lack of traditional old-fashioned analog gauges: they are filled with multi-function LCD screens and other electronic instruments to such an extent they are known as “glass cockpits”.

Actually, digital technologies also equip flight helmets that are interconnected with the airplane to project relevant information, including aircraft’s airspeed, altitude, weapons status and aiming on the visor, enabling the pilot to look out in any direction with all the required data always in his field of vision.

Even if digital equipment has improved safety, reliability, accuracy of all weapons systems, they can still be the cause of some rather dangerous and embarrassing incidents.

In 2011, a computer virus infected U.S. Predator and Reaper drones ground control stations, logging pilots’ keystroke during their missions over Afghanistan, Libya and other warzones.

Few days ago, USS Guardian, a U.S. Navy minesweeper en route to Indonesia, ran aground on the Tubattaha Reef on Jan. 17, and it looks like a digital chart used for navigation has been a significant contributing factor to the mishap. 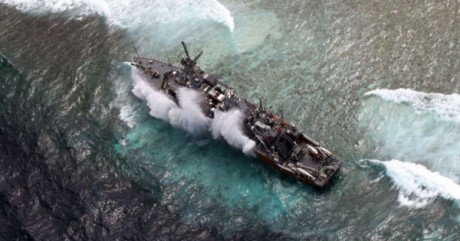 Noteworthy, according to Navy Times (highlight mine): “as of Jan. 18, Navy ships have been directed to “operate with caution” when using similar electronic charts and compare the map data with paper charts, which are considered accurate.”

While the investigation will determine all the contributing factor to the incident, the preliminary analysis indicates that the reef was misplace as a  result “from incorrect geographic rectification of satellite imagery used to built” the type of Digital Nautical Charts (DNC) used by the minesweeper and most USN ships.

Hence, not an epic fail as that of Apple Maps, but possibly more dangerous.

All the source data for nautical charts will be reviewed.

In the meanwhile old paper charts will guide U.S. warships through the world’s troubled waters.

This is what a trap landing on the flight deck of USS Truman aircraft carrier looks like from the cockpit of a U.S. Navy C-2A Greyhound aircraft. The Grumman C-2A Greyhound is a twin-engine, high-wing […]