Whilst the French Air Force is currently using the plane as a reconnaissance and attack platform in the Mali Air War, the Spanish Air Force is about to decommission the Dassault Mirage F1.

The Chief of the Spanish Air Force Staff (JEMA), Air General Francisco Javier García Arnaiz, recently reported that this year they would “eliminate three systems,” those that already have substitutes: the C-212 Aviocar and Fokker F-27 in the SAR Service, and the Mirage F1 fighters.

In the latter case, the Eurofighter will replace it completely when it reaches the initial operational capability in the 14th Wing Air Base in Los Llanos (Albacete).

The acquisition of the French fighters by Spain in 1972 was due by the constant interference of the United States regarding the use of Spanish Air Force’s U.S. military equipment, especially in the case of the F-86 Sabre and T-33 Shooting Star jets in the conflict of Sidi Ifni (Morocco). With the acquisition of the Mirage F1, the Spanish government marked the end of dependence on diplomatic vetoes.

In the second half of 1976 a 2nd batch of planes arrived and two years later a final 3th batch which included 6 two-seater F1 BE and 24 of the most advanced single-seat F1 EE was delivered.

With this new batch, Spanish Air Force could create the 142 Squadron. The most advanced F1EE went to  the 46th Wing based in Gando, Canary Islands. 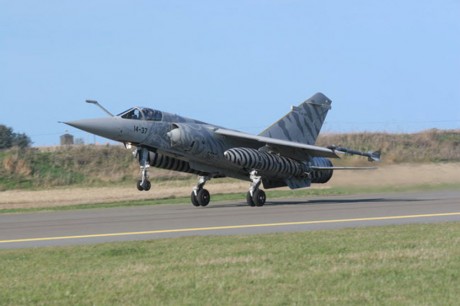 Nicknamed ‘La abuela’ (Grandmother) by the Spanish pilots, the Mirage F1 has been an active member of the annual NATO Tiger Meet since 1986. From this year, the state-of-the-art Eurofighter Typhoon will take that role within the 142 Squadron.