Almost one year ago today (on Jan. 20, 2012), citing the progress the F-35B STOVL (Short take off vertical landing) variant made in 2011, Secretary of Defense Leon Panetta rescinded probation for the F-35B, about one year ahead of schedule.

The STOVL had come close to be scrapped after technical issues along with massive cost over runs had put the monumentally complex version at risk.

However, when it looked like it had solved all those problems that had jeopardized its survival, the STOVL (Short Take Off Vertical Landing) version of the F-35 Lightning II 5th generation fighter plane, found another possibly major issue to face.

On Jan. 18, 2013, Defense News was the first media to spread the news that the DoD office in charge of the F-35 program has grounded the F-35B variant of the Joint Strike Fighter for precautionary reasons after a test flight at Eglin Air Force Base, Florida, was aborted by the pilot as the plane was conducting a conventional takeoff roll. 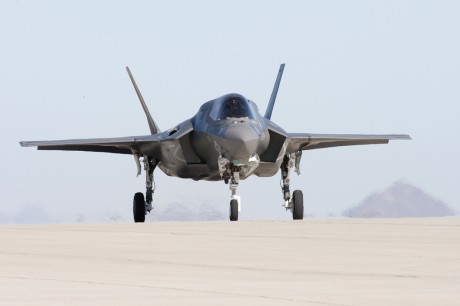 According to Defense News’s Aaron Mehta the abort was caused by “a failure to a propulsion fueldraulic line, which enables movement in the actuators for the STOVL’s exhaust system.”
Whilst Pratt & Whitney and Rolls-Royce engineers investigate the incident on the P&W engines that have successfully completed almost 25,000 hours of testing, the other two variants (A – conventional, and C – Carrier Variant), are not affected by the grounding.

Along with the U.S. Marine Corps, Italy (both Air Force and Navy) and the UK are going to be equipped with the F-35B. At least, they hope so…:)

Taken on Aug. 8, during an airstart testing mission, this cool picture shows F-35B test aircraft BF-2 overflying Edwards Air Force Base, California. Edwards AFB is the most famous U.S. test base. Home of the […]

The following air-to-air photo shows an F-35B, the STOVL (Short Take Off Vertical Landing) version of the Joint Strike Fighter, during a test flight. Maybe it’s because it was taken as it was extending the […]