The first two UK pilots have begun their training to fly the F-35 at Elgin AFB, Florida.

The two pilots are part of a small band of only 30 pilots that are either learning to fly the jet or have actually flown it. Royal Air Force Squadron Leader Franki Buchler and Royal Navy Lt. Cdr. Ian Tidball have joined U.S Marines Fighter Attack Training Squadron 501, which is charged with the initial training on the F-35B, the version that has been purchased by the UK (after a rethink or two..).

It is thought along with the two pilots, 12 engineers (maintainers), 2 supervisors and all of their families have moved from the UK.

According to the nwf news website this group will be joined in 2014 by another pilot and around 50 more maintainers and will head to Edwards AFB Ca. and will stand up their own UK squadron to combat test the jet. It would be around this time that the UK will write down its methods of operating the new stealthy jet in a combat situation, tactics and getting the best out of the jet that sort of thing. It is thought the UK F-35B will carry Storm Shadow, SPEAR, a missionised gun and METEOR air to air missile.

The nwf site says that the UK group have been told that they are operating as Marines by their commander Wing Commander Jon Millington whom was quoted as saying “I told them, You are part of that Marine squad. Embrace it. Enjoy it. You won’t have a chance to be a Marine again.” 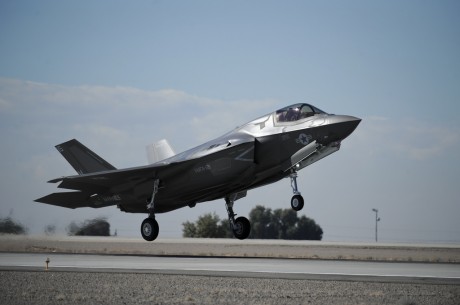 The group has been taking part in squad runs and they have noticed that the Marines require more physical training than what they are used to, but Millington thought it a good thing and said “It’s going to get my fitness back into shape.”

Millington said that the Marines have bent over backwards to make them feel that they are Marines (that have recently activated the world’s first operational squadron at MCAS Yuma), so much so some even invited the Brits to celebrate Thanksgiving with their families. Marine Col. Art Tomassetti was quoted as saying “The F-35 would not be here today if it wasn’t for the U.K.” and went on to acknowledge the United Kingdom has the most knowledge on earth about short take off and vertical landing capabilities.

Two of the U.K’s development aircraft are already at Eglin and will be joined in February 2013 by the third and final development jet; these three jets are expected to fly to the UK in the 2018 timeframe.