A new non-combat record was set on Oct. 2, 2012 by the 29th Attack Squadron, 9th Attack Squadron, and the 6th Reconnaissance Squadron which flew six MQ-9 Reapers and four MQ-1 Predators simultaneously during a training mission at Holloman Air Force Base, New Mexico.

The new record was made possible by the recent increased training capacity of the 29th ATKS, 9th ATKS and the 6th RS, the squadrons that train all of the Air Force MQ-1 and MQ-9 aircrew members, that brought from 6 to 10, the amount of lines, (consisting of the aircraft, a ground control station and all maintenance and flight personnel required to keep an aircraft airborne) needed to meet the U.S. Air Force drone force training requirements.

The record-setting training flights were manned by 10 crews composed of instructors and students, both pilots and sensor operators.

It will arrive the day when there are more drones than conventional planes flying at a certain time…. 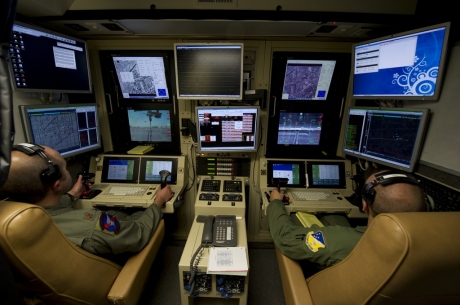 About David Cenciotti 4250 Articles
Website Facebook Twitter LinkedIn instagram
David Cenciotti is a freelance journalist based in Rome, Italy. He is the Founder and Editor of “The Aviationist”, one of the world’s most famous and read military aviation blogs. Since 1996, he has written for major worldwide magazines, including Air Forces Monthly, Combat Aircraft, and many others, covering aviation, defense, war, industry, intelligence, crime and cyberwar. He has reported from the U.S., Europe, Australia and Syria, and flown several combat planes with different air forces. He is a former 2nd Lt. of the Italian Air Force, a private pilot and a graduate in Computer Engineering. He has written four books.

Check out these interesting shots of a Viper from the 149th Fighter Wing with the “new” paint that has replaced the older two-tone gray as the standard paint scheme for USAF F-16s. The U.S. Air […]

New images of the mystery bird-like drone crashed in Pakistan. Taken in Iraq.

In August 2011, a video clip from Kalam TV brought to light the capture of a mysterious American bird-like drone crashed over southwestern Pakistan (image below). Although initially believed to be a sort of home […]

Markings Continue in Homage of The Greatest Generation in the Greatest Invasion. As special commemorative events in Normandy, France and around the world are held to observe the 75th anniversary of the D-Day invasion, both […]