They seem to believe it. 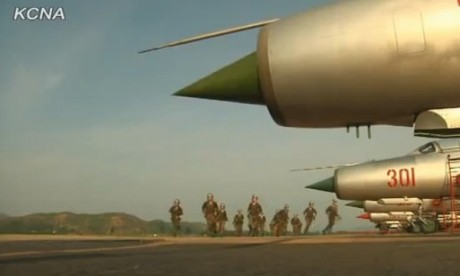 In the following video, personnel of the North Korean Air Force proudly affirm that they are in full readiness to attack and annihilate their enemies at one blow. Among them: U.S. and South Korea.

Unfortunately, based on their uniform, flight gear and aircraft, the following video looks like it was filmed in the ’60s or ’70s.

Obsolete Mig-21, Shenyang F-6 and more recent (still quite old) Su-25 and Mig-29 jets would not have an easy life against ROKAF F-16s and F-15s. Not to mention U.S. fighters and bombers.

Wanna Know If A New North Korean Missile Test Is About To Take Place? Look For This U.S. Aircraft Online…

You can monitor online the U.S. RC-135S Cobra Ball aircraft used to track ballistic missiles reentry vehicles and warheads during the final phase of flight. Early in the morning on Jul. 4, North Korea successfully […]

The presentation was held during the celebrations of the 71st Armed Forces Day and the 70th anniversary of ROKAF (Republic Of Korea Air Force), one day before North Korea carried out possible submarine-launched ballistic missile. […]

That’s a live firing exercise! The following video was filmed in mid August 2015, at Seungjin Training Field, South Korea, during 2015 Integrated Live Fire Exercise. It shows, among the others, ROKAF (Republic Of Korea […]