On Feb. 14, CF-6, first Lockheed Martin production model F-35C carrier variant, made its maiden flight from LM’s facility at Forth Worth, Texas.

Since it will delivered to the US Navy Fighter Attack Squadron 101 (VFA-101)  “Grim Reapers” at Eglin AFB, Florida, the F-35C CF-6 sported cool high-visibility color scheme and markings.

The Grim Repers were established in May 1952, flew various fighter jets, including the F-4 Phantom and F-14 Tomcat before being disbanded in 2005.

It was reestablished in May 2012, to support the U.S. Navy version of the CV (carrier variant) and serve as Fleet Replacement Squadron, training Joint Strike Fighter pilots and maintainers as a subordinate unit of the joint 33 Fighter Wing.

The CF-6 will be the first carrier variant F-35 assigned to Eglin: 9 F-35A conventional takeoff and landing (CTOL) jets and 13 F-35B short takeoff and vertical landing (STOVL) jets are already based there. 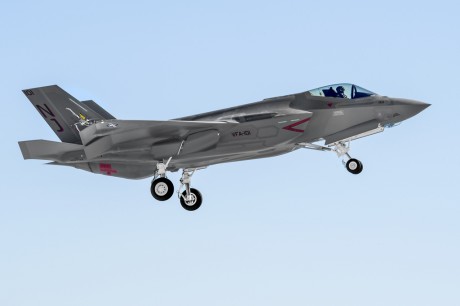 At least 10 helicopters were damaged in a sudden storm, resulting in 10 Class A ground mishaps. On July 26, 2022, a sudden storm struck Chambers Field, the military airport which serves Naval Station Norfolk, […]