Although the military campaign in Mali is still in progress, we can already draw some of the lessons the French Armed Force may have learned from this low intensity air war.

1) The need for more ISR platforms: The French Air Force operates three Harfang drones, two of those are deployed in Niger. Usually, five drones are required to keep two CAP orbits active on a 24-hour basis.

So far, the Harfang drones have been used to support French special missions, providing surveillance in the vicinity of the airfields and cities about to be taken by the paratroopers (as videos published on The Aviationist show). You need many more UAVs to look for rebels, track suspicious activity and support convoys/special ops across large territories as Central and North Mali.

Furthermore, French drones are not armed and manned bombers are required to strike ground targets identified by the Harfangs. For all the above mentioned reasons, the help of U.S. drones (some of those are weaponized MQ-1s) is paramount.

Last but not least, French planners are in desperate need to track rebel movements. For this reason a British Sentinel R.1 is supporting the operation from Senegal and the U.S. has allegedly offered an E-8 JSTARS.

2) There’s a problem with tankers. Even if only a few combat planes are involved in the air strikes, the French Air Force is not equipped with a tanker force capable to sustain a limited amount of attack sorties. That’s why the U.S. has dispatched some of its KC-135s from RAF Mildenhall and other nations have offered aerial refuelers.

Furthermore, Operation Serval (a relatively small campaign) had to rely on the help of foreign countries that dispatched their airlifters to help the French moving equipment and personnel to Mali. Front line combat planes have to be supported with cargo planes sorties.

As happened in Libya, the Mali air war will probably reaffirm the need for low-cost/cheaper combat planes: the Rafale is a multirole aircraft that can carry a wide variety of weapons and pods, including a reconnaissance pod. But it is also quite expensive in terms of cost per flight hour as the majority of the most modern fighters.

The fact that the French Air Force is flying the Mirage F1CR in theater helps containing the cost of prolonged operations abroad.

4) Even if Mirage 2000 and Rafale have flown with PGMs (Precision Guided Munitions); still, not only heavy (and costly) weapons are needed in Mali, given the amount of soft above ground targets.

That’s why Mirage F1CR have been operating with four Mk-82s, 500-lb unguided, low-drag general-purpose bombs, equipped with a DSU-33 airburst fuze: the fuze is used to initiate detonation at a preprogrammed heigh-of-burst (HOB) enhancing the performance of the rather basic (and cheap) bomb. 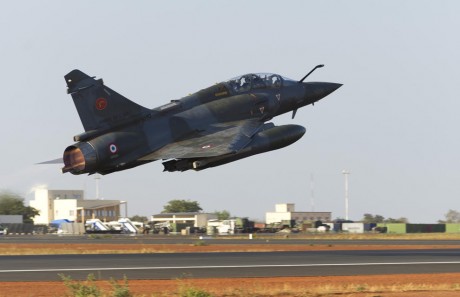 Swiss Air Force Cougar helicopters have crossed the border to collect water for cattles. A really weird and unexpected incursion into the French airspace took place at the end of July. According to what “Neue […]

The following images were taken at RAF Lossiemouth by The Aviationist’s contributor Alessandro Fucito, during the recent Exercise Joint Warrior 2013. They show one of the two French Atlantique II maritime patrol aircraft sporting two […]