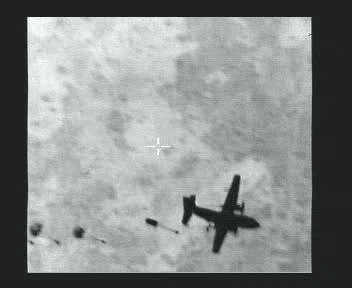 It was taken on Jan. 28, from the Infra-Red camera of a Harfang drone, supporting Operation Serval from Niger.

The Harfang drones are the only French UAVs reportedly operating in West Africa. These ISR (Intelligence Surveillance Reconnaissance) platforms are about to be supported by a RAF Sentinel R1 deployed in Senegal.

The Sentinel will be extremely important in Mali, maybe more than it was in Libya. The aircraft is the air segment of the Airborne STand-Off Radar (ASTOR) system, uses a Synthetic Aperture Radar (SAR) imagery and Ground Moving Target Indicator (GMTI) to detect and track enemy ground forces. With a Dual Mode Radar similar to the U-2s ASARS, the Sentinel will be able to provide French forces with data relating to the rebels movements as it did in Libya pinpointing Gaddafi’s forces.

A U.S. Air Force KC-135 and French Rafale involved in an mid-air emergency over Mali. Taken from a 100th ARW (Air Refueling Wing) KC-135 Stratotanker during what seemed to be (at least until then) a […]

What seemed to be start as a pretty intense war against the local rebels in Mali has already turned, at least momentarily, into a low intensity air campaign. In the last 24 hours, just 8 […]