The Armee de l’ Air has been on the pointed end of operations over Mali with numerous missions against rebel fighters as reported by TheAviationist.

Over the weekend of Jan. 12 – 13 President Francois Hollande spoke with UK Prime minister David Cameron and requested help from the British.

David Cameron offered the services of two C-17 Globemaster III airlifters, the first of which landed at Everuex-Fauville airbase on Sunday Jan. 13.

Due to leave the same day the aircraft went tech with an un-named problem which delayed the aircraft by 24 hours. It eventually left on Monday to a destination that is unknown but is thought to be N’Djamena airbase in Chad.

It is obvious the French needed supplies airlifted to the area quite fast; with a fleet of C-130 Hercules and C-160 Transall aircraft which simply don’t have the airlift capability of the C-17 it was felt this is the best way to help out. 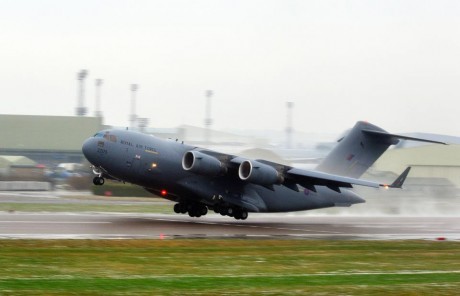 The Telegraph ran an article that stated that the UK would also share intelligence with the French military and went on to state drones and spy planes have been put on stand-by.

The aircraft that they are referring to would be a Sentinel R1 which gained accolades during operations over Libya, due to its unique capabilities. Also known as Airborne Stand-off Radar (ASTOR) this platform is fitted with a Dual Mode Radar (DMR) that is quite similar to the U-2 ASARS radar and provides both Synthetic Aperture Radar (SAR) imagery and Ground Moving Target (GMTI) data. In simple word, the Sentinel would provide the French forces with data relating to the rebels movements as it did in Libya pinpointing Gaddafi’s forces.

The drones mentioned are most likely MQ-9 Reapers which are operated by 13 Squadron RAF from its new operating base RAF Waddington. The Royal Air Force remotely controls its Reaper fleet over Afghanistan from Creech Air Force Base, in Nevada. However, since Oct. 26, 2012, 13 Squadron was stood up to fly the Reaper from UK soil for the first time. This unit would probably manage British unmanned aircraft should these be deployed to Mali.

Interestingly, the Canadian government has offered the services of one C-17 for a week to help the people of Mali.

The Globe and Mail reported that the aircraft will fly equipment from France to Bamako, the capital of Mali, to help in the protection of the Malian government from the rebel attacks and will not be used in any combat areas or roles.

The Wall Street Journal said that U.S officials are looking into what equipment could be sent but stressed non will be involved in combat in the area, even if drones and spyplanes have been flying over Northern Mali for months.

It’s thought that the F-1CR’s are using multiple bomb racks with four GBU-12 bombs for attacks on the rebels. The Mirages are also used for reconnaissance whereas Mirage 2000s and Rafales are used for air-to-surface missions.

Richard Clements for The Aviationist

Moscow wants to buy the Mistrals, a deal that is not going be closed anytime soon, unless Putin resigns from his involvement in Ukraine. Press release by the Russian Helicopters company suggests that the naval […]

All aircraft will be retrofitted to the new standard while the future F4 upgrade is already in development The French Air Force announced that the Dassault Rafale F3-R, the latest upgrade of the aircraft, achieved […]