Jan. 13 saw the first involvement of the Rafale combat planes in the French air campaign in Mali.

Four “omnirole” jets from Saint Dizier airbase, took off from their base and, supported by two C-135FR tankers, attacked rebel’s training camps, infrastructure, logistic deposits before recovering to N’Djamena airbase, in Chad. 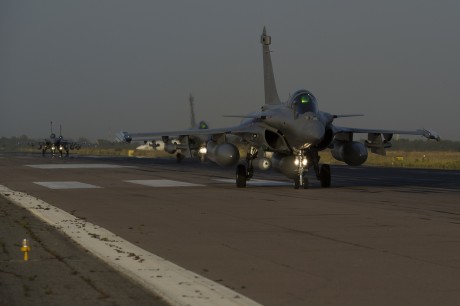 Most probably, the aircraft crossed the Algerian airspace on their way to Mali, since Algeria has authorized unlimited access to fly over its territory.

According to the Rafale News blog, this was the first time that the Rafale used the dual mode (laser/GPS) GBU-49 guided bomb during a war mission as the intergration of this kind of weapon was only recently completed. 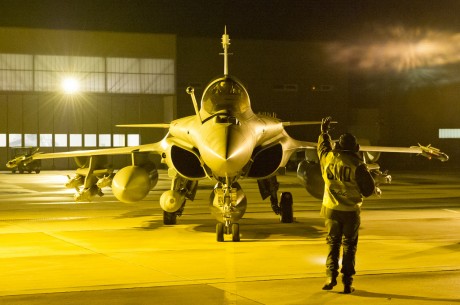 As per the video released by the French MoD after the raid and showing the four jets landing in Chad at the end of their strike mission, 21 weapons were released during the attack, since one of the jets still has three of its six AASM.

The four jets are currently deployed to N’Djamena airbase will reinforce the French contingent involved in Operation Serval.

As shown in Libya, during the 2011’s Air War, the Rafale is capable to perform a wide range of missions, including air-to-air refueling and reconnaissance (the latter by means of the Reco-NG pod).

On May 2, a Greenpeace activist flying a paraglider, entered the forbidden airspace over the Le Bugey nuclear power plant, between Lyon and Geneva, and dropped a smoke device on the reactor containment structure to […]

These are flight deck ops. French style. This cool video filmed with GoPro cameras, shows launches and recoveries aboard the 38,000-ton, nuclear-powered aircraft carrier Charles De Gaulle. The footage not only lets you observe blue water […]