The international conference is always held under strict security restrictions on the airspace over Davos. Although civilian aircraft may continue to fly through the restricted airspace imposed during the meeting, they have to be announced and identified. If they fail to do so, or if the need arises, they are intercepted and escorted in accordance with international rules and procedures.

This means that a complex airspace surveillance operation is put in place each year with assets belonging to the Austrian and the Swiss Air Force.

Taken by Monica De Guidi of the VRN Spotter Group, the stunning photographs below show two Austrian Typhoons performing some touch and gos at Innsbruck during a combat air patrol on Jan. 26, 2013.

The Austrian combat planes, as well as some PC-7s also deployed to Innsbruck, flew their missions as part of the national airspace surveillance operation dubbed “Daedalus 2013”. 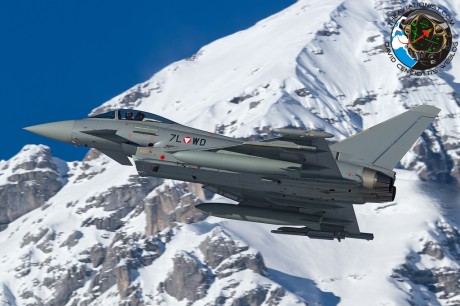 This year, the Swiss airbase tasked with WEF support was Meiringen in the Bernese Oberland.

F/A-18 and F-5E jets were tasked with the enforcement of the temporary no-fly zone around Davos, with the Hornets performing both day and night missions carrying AIM-9X and AIM-120B AMRAAM missiles, and the Tigers, carrying AIM-9P5 on daylight missions. 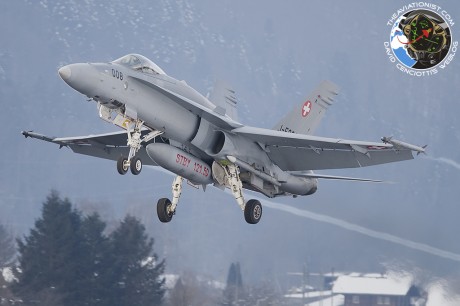 Alessandro Fucito went there and took the pictures of the Swiss Air Force planes launching and recovering from WEF-13 missions that you can find in this post.

As already noted in previous WEF ops, the F-18 carried a single underfuselage fuel tank with sporting the “STBY 121.50” text: it is a message to an eventual plane intercepted by the Hornet to switch the radio on the 121.50 MHz, the international emergency frequency, for air-to-air radio comms with the fighter jet. 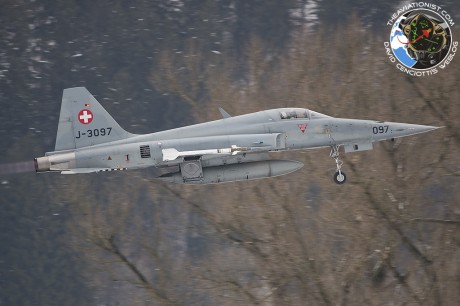