In 2012 a P-3 Orion decided to fly close to a U.S. carrier at sea. And these images show what happened next.

The images in this post, published on an Iranian site (that is currently down) were probably between January and June 2012, when USS Abraham Lincoln (CVN-72) operated in the Persian Gulf.

They show what happens each time an Iranian Navy Fokker 27 or P-3 Orion (as in this case) decides to skirt an American flattops that is operating within the Fifth Fleet AOR (Area Of Responsibility): it’s intercepted and escorted (in this case by an F/A-18E Super Hornet of the VFA-137 “Kestrels” in cool digital color scheme.

Since these maritime patrol planes fly in international airspace and don’t pose a real threat to the Strike Group, the aircraft carrier doesn’t need to take any real defensive action other than tracking the surveillance plane all time or divert one of its fighter jets to intercept it.

Aircraft carriers don’t even need to change their course if a spyplane pops up on the radar, provided that it is not armed and it doesn’t show an aggressive behaviour.

Every now and then even Iranian speedboats and maybe subs pay visit to the U.S. nuclear-powered carriers. 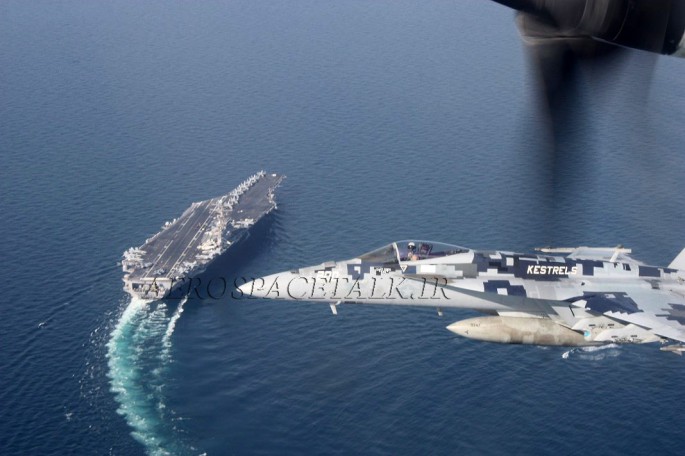 H/T to Bjorn Broten for the heads-up

Black Eagles return home from WESTPAC and Liberty Bells relocate to new home at Point Mugu. With some cool special markings. On Jun. 21, 2017, NBVC Point Mugu saw the homecoming of the VAW-113 “Black […]

Earlier this year Iran unveiled the Qaher F-313 stealth fighter jet “one of the most sophisticated fighter jets in the world,” according to Tehran. Even if Iranian media outlets published articles that listed the aircraft’s top […]

An A320 had to make an emergency landing at Khmeimim air base, in Syria, after Syrian air defense almost hit the airliner according to the Russian MoD. News outlets around the world are reporting that […]