Developed at the end of the 1960s to be the best air superiority fighter in the world, the F-15 proved to be a real MiG Killer during the Operation Desert Storm scoring most of the allied aerial victories.

During the Air War over Iraq the mighty Eagle proved also to be a very robust airframe, bringing back its pilots also after suffering serious damages.

After the first ten days of the first Gulf Air War, to avoid the destruction of their air force, Iraqis flew their aircraft to Iran and to prevent this “exodus” the U.S. Air Force was forced to establish a permanent BARCAP (BARrier Combat Air Patrol) whose aim was to protect the zone between the Iraq and Iran borders, 24 hours in each day of the week.

The task to fly these missions was given to the F-15s flights: each of them was composed by four airplanes which covered a six hour window before being replaced by the following four ship of Eagles.

On Jan. 28, 1991 one of this BARCAP was flown by four F-15s belonging to the “Wolfhounds” of the 32nd TFS (Tactical Fighter Squadron) from Soesterberg, deployed to Incirlik Air Base in Turkey.  Capt. Don “Muddy” Watrous piloted the Eagle number four of the formation. It was in the midst of their air refueling that the AWACS contacted them to tell that four bandits were airborne: the flight completed the refuel and headed towards the enemy aircraft.

As the four ship approached the bandits it became clear that “Muddy” and the number three of the formation, “Bagwan” Baughan were the lead in the engagement: due to “Bagwan” F-15 radar breakdown, the clearance to engage was confirmed to “Muddy”.

So the F-15s approached the bandits, which were flying in a line abreast formation and had entered in the Sparrows shot range:  Watrous locked the nearest and fired its first AIM-7, followed, five seconds later, by another one. But both missiles missed the target.

At this point the F-15s were above the bandits and “Muddy” saw them under its Eagle: he nosed over and simultaneously jettisoned its three tanks still full of fuel: the reduced weight produced a great jolt followed by an instantaneous acceleration at supersonic speed.

Thanks to the speed he had achieved “Muddy” was close enough to lock again the nearest bandit and fire the third Sparrow; once again the missile missed the enemy aircraft, so Watrous fired its last AIM-7 and finally the Sparrow hit the bandit which lost its right wing and crashed on the ground inverted, leaving no time to the pilot to start the ejection sequence. 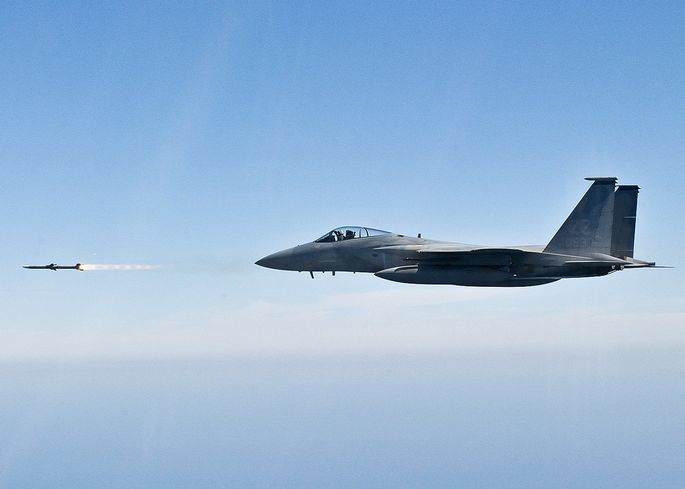 “Muddy” had also a good tone on its AIM-9 Sidewinder missiles, but the other bandits were outside the IR air-to-air missile range, the F-15 was close enough to Iranian border and at Joker (the fuel level that dictates the end of the mission and the beginning of the recovery). So Watrous formed up with “Bagwan” and it was at this point that he noticed something strange at his left wingtip.

The jettison of the three tanks produced the sudden jolt which broke two feet of the left wingtip, leaving the wire of the position light in the air.

The two F-15s moved to the tanker again since they were low on gas and during the air refueling the boomer took a picture of Muddy’s Eagle without the left wingtip.

Once the tanks were full of fuel again, “Muddy” and “Bagwan” were able to safely return to the base, while the other two F-15s ended the BARCAP:  Watrous had to wait several days before its kill was confirmed and the bandit was identified as a MiG-23 Flogger. This delay was due to the fact that during the explosion of the enemy fighter, “Muddy” was alone and separated from the rest of the flight. But the greater surprise came few months later when he received a package with the picture of its Eagle without the wingtip taken by the boomer, as a reminder of a hard workday.

“Muddy” Watrous aerial victory was the only kill for the  “Wolfhounds”  during Desert Storm, their last major deployment, before being disbanded in January 1994.

Dario Leone for The Aviationist

The announcement came a few days after the mission where the Bones flew with assets from Poland, Romania and Ukraine. As we already reported last week, two U.S. Air Force B-1B Lancers from the 28th […]

Beginning next year, the demo pilot and team will be from the 388th FW. The U.S. Air Force announced on September 04, 2019 that its F-35A Demonstration Team will be reassigned to the 388th Fighter […]