The US Air Force has awarded Lockheed Martin an indefinite-delivery/indefinite-quantity contract with a ceiling of $6.9 billion to upgrade the service’s fleet of F-22 Raptor stealth fighters.

Lockheed said that “The Air Force uses this to authorize the Incremental Modernization capability efforts such as Increment 3.1, Increment 3.2A and Increment 3.2B” 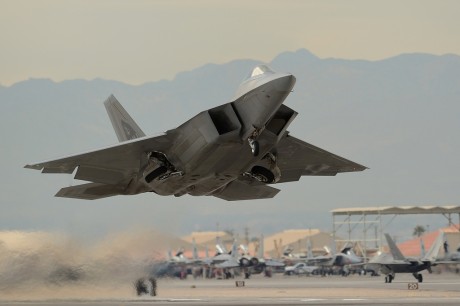 Under increment 3.1 upgrade the fleet of radar evading 5th generation planes will get synthetic aperture radar (SAR) with ground mapping capability as well as the ability to carry eight 113kg (250lb) Small diameter bombs, in 2014; the increment 3.2A will see additional electronic protection measures and upgrades to the Link-16 data link system and its ability to work with the jets sensor suite.

In 2017, increment 3.2B will see the software and hardware upgrade to allow the Raptor to use the AIM-120D and AIM-9X missile systems, although a limited ability will be added before this date.

The use of the AIM-9X with an Helmet Mounted Display (initially not implemented on the plane) would give the F-22 an HOBS (High-Off Bore Sight) capability currently lacking.

Further upgrades as part of 3.2B will see further improvements to the electronic protection system and an upgrade to the aircraft geo-location system.

Increment 3.3 is in the pipelines but will be funded from another proposal at a later date and no further details as to what this will actually be is available.

The upgrades will give the costly and troubled stealth fighter, whose dominance of the skies has been debated since the Eurofighter Typhoons involved in the Red Flag Alaska exercise last year achieved some (simulated) Raptor kills, the capability to perform effectively in both air-to-air and air-to-surface missions.

Something the F-35 should sometime do as well.