As the image below proves, the observation window on a Royal Air Force C-130K (that reminds a WWII gunner’s ball turret) may be the best seat you will ever find on board an Hercules cargo.

Especially if the plane is flying a low level training sortie in the famous Mach Loop. 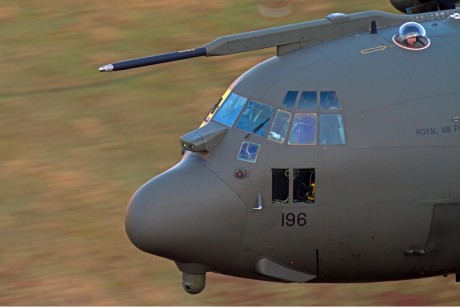 Low flying training is a crucial part in both jets and airlifters pilot training. Aircraft involved in special operations, reconnaissance, Search And Rescue, troops or humanitarian airdrops in trouble spots around the world may have to fly at low altitudes.

RAF C-130 Hercules pilots relied on their low level training when they flew over the desert and in hostile airspace to rescue oil workers trapped in Libya in 2011, when the country was evacuated.

The RAF Hercules C-130K fleet will soon be retired, the specialist operations role will be transferred to the newer C-130J Super Hercules fleet.

On Sept. 8, Eurofighter confirmed that the Eurofighter Typhoon has now achieved more than 200,000 flying hours since the entry-into-service of its worldwide fleet. 719 aircraft on contract, 571 aircraft ordered and 378 aircraft delivered: […]