After more than two months of air campaign, Unified Protector seems to be making a slow progress across Libya, even if the air campaign is far from being decisive against Gaddafi and his forces. At least, Misratah is no longer under siege. There’s no shelling on the city centre or on the port, that is open to the humanitarian aids flow. The turning point was reached when NATO started targeting Gaddafi’s capacity to resupply his forces on the front. 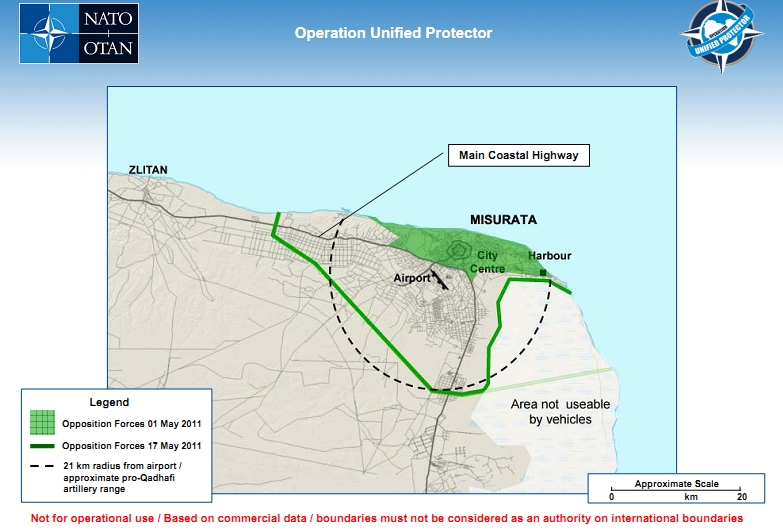 In the last Press Conference Wing Commander Mike Bracken, spokesperson of Unified Protector, admitted that the situation into the Berber Highlands and the western side of the country is difficult and concerning. He explained:

Here […] Pro-Qadhafi forces do not control the area, but they are putting the civilian, largely Berber population, under significant pressure from shelling in Yefren, Zintan, Nalut and the Wazin border crossing.

NATO is focused on decreasing the pressure on the population by striking pro-Qadhafi units, and this strategy is clearly working.

Finally, moving to Tripoli. Here we have increased the pressure by striking military command-and-control centres. This has limited Qadhafi’s ability to give orders to his forces. It has also constrained his freedom of movement. Effectively, he’s gone into hiding.

On May 19, NATO hit 8 Libyan ships in the ports of Tripoli, Al Khums and Sirte. At Khums NATO hit a number of RHIBs (Rigid-Hulled Inflatable Boat) in the maintenance facility. The RHIBs were directly linked to the maritime operations of preceeding days when NATO interdicted a booby-trapped RHIB, leading to the discovery and subsequent destruction of one tonne of explosives at sea. NATO and partners used a number of communications channels to tell the pro-Gaddafi forces to lay down their arms and return to their bases and homes. “We have been stepping up leaflet drops and radio broadcasts to the pro-Qadhafi forces, telling them to move away from their military equipment, military installations and maritime assets” Bracken said. PSYOPS messages sent by the EC-130J using the very well known callsign “Steel 74” were heard before and after the attack on May 19, meaning that, most probably, there are other Libyan vessels being warned.

Loyalists are finding it harder to lauch attacks and to receive supplies, NATO has attacked an increasing number of Command and Control nodes but the news, announced on May 23, that both France and UK have decided to deploy some attack helicopters in theatre, shows that coalition partners are considering even other options to break the stalemate in the conflict. I’m not sure those being considered are the right options, though.

For sure attack choppers, such as the British AH-64 Apaches or the French Tigers, can be extremely effective if used to hit enemy tanks, convoys and vehicles, but they are also vulnerable to MANPADS, RPG and anti-aircraft fire especially if employed in Urban CAS scenarios. Those advocating the use of attack helicopters in Misrata or, generally speaking, in besieged towns, should not forget the lessons learned by the Apaches of the 11th Regiment during the attack on Karbala. Helicopters are the perfect tool for a certain kind of CAS (Close Air Support) and to support Special Forces, as the recent Osama Bin Laden raid in Pakistan shows. But they are not as effective if employed without the proper support of troops on the ground and when used against adversary forces that are too dispersed, intermixed with civilians and hidden (hence  not easily identifiable and targetable).

Flying at low altitude and speed, in spite of their countermeasures and armour, they tend to be subject to every kind of weapon the enemy can still own: from the small arms, to the mobile SAMs, to the MANPADS and also the RPGs. There’s an important difference between Close Air Support and Battlefield Air Interdiction (BAI): the first one requires boots on the ground; the second doesn’t; the first is what helicopters are perfectly suitable to (either as a support/anti-tank platform or as an escort/recon one); the second, is the most common kind of mission flown in Unified Protector.

Anyway, something like 3 or 4 British Apaches and an unknown number of French Tiger attack helos (or obsolete Gazelles), respectively embarked on HMS Ocean and Mistral class assault ship Tonnerre, will at least put some pressure on Gaddafi’s forces that will have to put out their hidden weapon if the want to try to hit them.
Without considering that, flying from ships, they will only be able to patrol the coastal regions and will not be capable to intervene on inland targets. 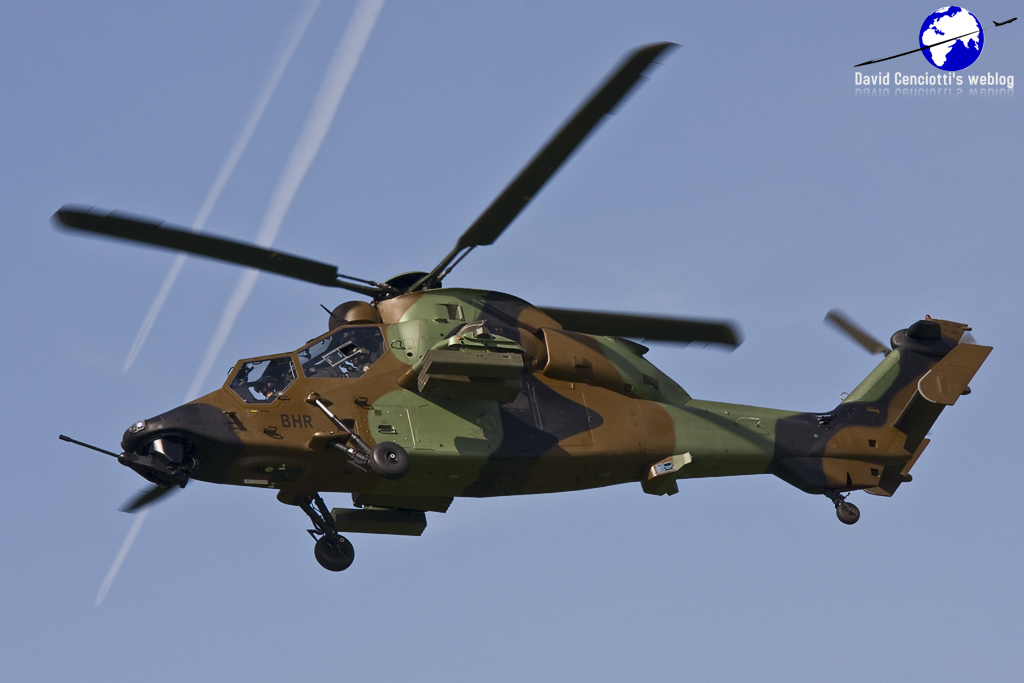 2) The Italian contingent was quite active during the last weeks. It performed 54 missions between May 13 and 20 with its Tornados (IDS and ECR), Typhoons, F-16s, KC-130Js and, now, also KC-767As and G.222VS. This proves that the war in Libya has been an unbelievable opportunity for many air forces and aircraft manufacturer to test new equipments, weapons and (most probably) tactics. After the Rafale, Gripen, Typhoon in the air-to-ground role (to name but few), the last new product to make its operational debut in Libya has been the recently formally accepted ItAF KC-767A. In fact, the new tanker was involved in air-to-air “refueling missions of Italian assets” involved in Unified Protector alternating in the AAR role with a KC-130J (that has been used since the early stages of Odyssey Dawn). Indeed, the 14° Stormo, based at Pratica di Mare airbase near Rome, has received the first aircraft on Dec. 29, 2010 and Mar. 10, 2011 and so far only Typhoons and Tornados have been qualified for refueling from the two wing stations (the aircraft uses also the boom refueling system used by US aircraft like F-15s, F-16s, B52s, etc.).

Noteworthy, even the only G-222VS in ItAF orbat (flown by air force pilots with mission crew belonging to other armed forces), already flying in the past few weeks for the Libyan crisis under national command, has been handed over to NATO to perform SIGINT activities.

Furthermore, on May 17, 2011, an Italian Air Force C-130J, departed in the morning from Pisa airbase, dropped about 400.000 leaflets over Tripoli, Libya. As reported by ANSA news agency, leaflets contained a message addressed to the Libyan people directly from the NTC (National Transition Council) that had asked Italy to deliver it to counter Gaddafi’s regime propaganda in Libya’s capital city.
The text of the message was:

Libya is one and its capital is Tripoli. Today we ask you to join and to take the right and wise decision. Join our revolution. Let’s build Libya away from Gaddafi. A unified, free, democratic Libya.

The mission was planned by the COI (Comando Operativo di vertice Interforze – Italian Joint Operative Command) and was conducted by personnel belonging to both the 28° Rgmt “Pavia, based in Pesaro and specialized in “operative communication”), the ItAF and the Intelligence Service. The airdrop took place from 7.000 mt (20.000 ft – the crew had to wear oxygen masks to operate at that altitude) from a position that was calculated taking into consideration many factors, among which the air temperature and humidity, the aircraft airspeed, the wind direction and intensity etc. Leaflets took up to 3 hours to touch the ground in Tripoli and surrounding areas.
The PSYOPS sortie was an Italian mission, not part of Unified Protector, even if NATO was obviously informed about the operation and supported it.

Even if Italy has conducted similar missions in Afghanistan using helicopters, this was the first time that the ItAF performed a PSYOPS mission dropping leaflets over a foreign capital since 1918 raid over Wien by Gabriele D’Annunzio (Aug. 9, 1918).

3) The Guardian has tried to understand “how much is each Nato country contributing to operations in Libya with the most comprehensive analysis yet of who is doing what in Unified Protector”. The article, titled “Nato operations in Libya: data journalism breaks down which country does what” is interesting as it provides a lot of data. Unfortunately, it contains also many inaccuracies (one time it provides the number of deployed aircraft, another one it gives a country’s number of aircraft under NATO command; there are errors about the deployment bases of some contingents; the consideration on the efforts are based only on the number of sorties and not on the type and/or number of dropped bombs; etc.).  Anyway, it is a good starting point for a more accurate in-depth analysis. 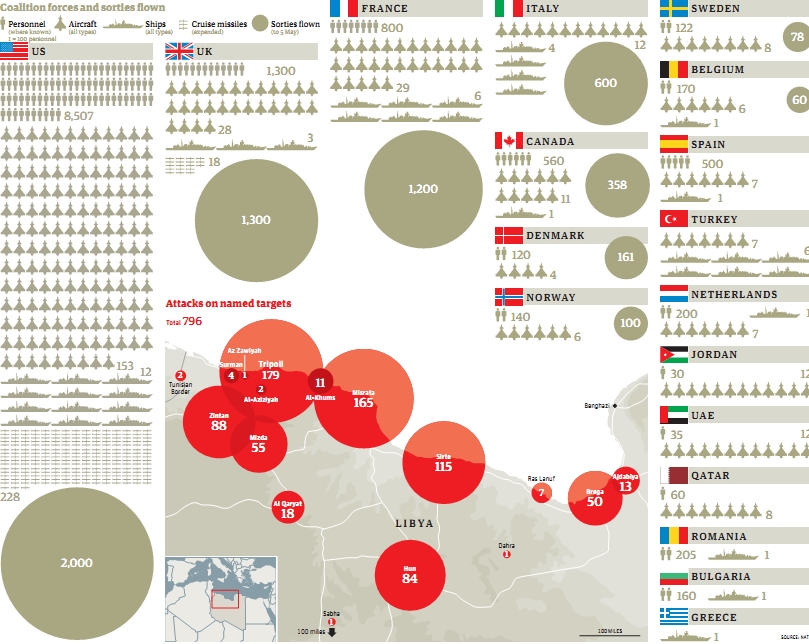 4) Thanks to the interesting pictures published at this website, we know that also UAE AF F-16s are flying air strikes (not only Mirage 2000s) with 2 GBU-12s, 4 AIM-120 AMRAAMs and SNIPER pod, as well as that Swedish Air Force JAS-39 Gripens, most probably, are not only flying reconnaissance missions, but also DCA missions with 3 drop tanks, 2 IRIS-T at tip pylons and 2 AIM-120s.

5) On May 21, a French Navy Super Etendard diverted to Malta Luqa airport for fuel problems while, on May 22, two Mirage F1s almost ran out of fuel on their way back to Solenzara airbase, in Corsica, and were compelled to perform an emergency landing in Olbia Costa Smeralda airport, in northeast Sardinia. These are only the last two episodes of a series of  French diversions caused by low fuel.  It looks like the French contingent is the only one experiencing such problems so frequently.

A unique video filmed from inside the Fire Control Station of an SA-8 “Gecko” during the engagement of a drone emerged few days ago. An interesting video of the shooting down of drone was released […]

Dutch F-16 and Apache Demo teams trained together ahead of Gilze-Rijen airshow, in the Netherlands. And here’s the view from inside the cockpits! Here are some interesting shots, once again taken with GoPro cameras aboard […]