We discuss the possible existence of a quieter “Stealth Little Bird”, based on a true story about the silent OH-6 used during the Vietnam War.

I’ve already written a lot about the Stealth Black Hawk (whose existence has been proven by pictures taken at Abbottabad the day after Osama Bin Laden raid) and also about a possible Stealth Chinook theoretically taking part in Operation Neptune’s Spear.

However I hadn’t thought about another stealth helicopter possibly flying in Pakistan during the OBL raid until I saw a video of a 160th SOAR rescue mission in Iraq that reminded me that the Night Stalkers often fly mixed formations of Black Hawks and MH-6 Little Birds, smaller choppers conducting, for example, rooftop insertions of Special Forces.

The 160th SOAR is equipped with both MH-6s and AH-6s, the attack version of the Little Bird, aircraft that were used in almost all US (special) operations: from Op. Urgent Fury (1983, Grenada) to Just Cause (1989, Panama) to Gothic Serpent (1992, Somalia) to Iraqi Freedom (since 2003) the MH-6s have been a constant presence within some of the most difficult operations involving Delta Force and Navy Seals. In 2009, AH-6s took part in the helicopter assault (involving Navy Seals) to kill wanted terrorist Saleh Ali Saleh Nabha in Baraawe, Somalia, taking off from a US vessel.

Having imagined the possible shape of a Stealth Black Hawk and Chinook, why not consider the possibility that even a modified, quieter, stealth MH-6X took part in the OBL raid flying with the 160th SOAR?

I know that there’s almost nothing that can give some credence to this theory especially because another Stealth helicopter on the scene would make the air space over Abbottabad too crowded. However, I wanted to give it a try and hear what my readers think about a Stealth Little Bird.

So, once again, I’ve asked Ugo Crisponi to help me with a rendering of a fictional “Black” MH-6 (6-bladed main rotor and 4-bladed tail rotor) that could be obtained with some modification of the original Little Bird: 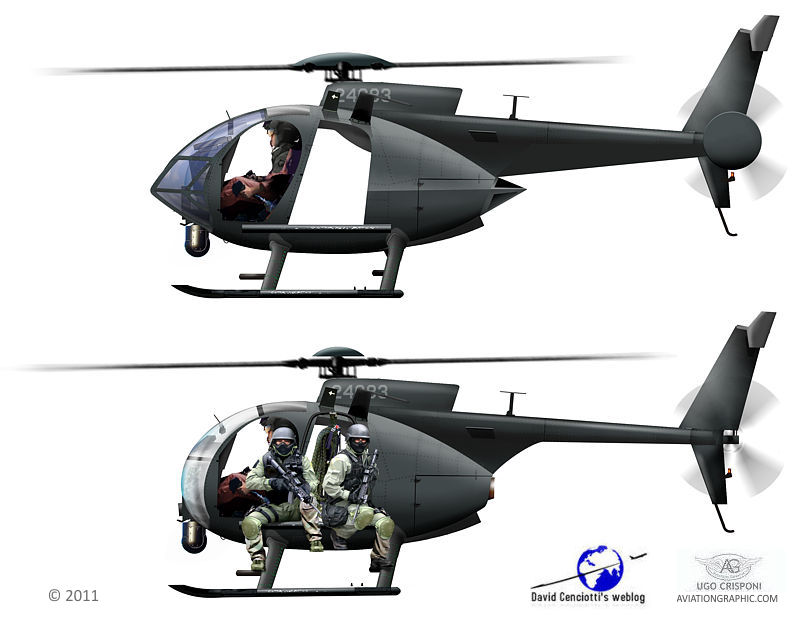 I’ve just said that there is “ALMOST” nothing to give credence to the new theory of a Black fleet made by Stealth Black Hawk, Chinook and Little Bird.

An extremely interesting article published in 2008 by Air & Space recalls the story of two OH-6As which were modified to fly with Air America and “to quietly drop off and pick up agents in enemy territory”. Dubbed “Quiet One”, the somehow stealth helicopters conducted their secret mission, on Dec. 5 and 6, 1972, when they carried in N. Vietnam commandos to place a wiretap and a solar-powered relay station that enabled Americans to eavesdrop communications on a telephone line used by the enemy commanders.

The article, written by James R. Chiles, provides some interesting details about the “Quiet One”:

The slapping noise that some helicopters produce, which can be heard two miles away or more, is caused by “blade vortex interaction,” in which the tip of each whirling rotor blade makes tiny tornadoes that are then struck by oncoming blades. The Quiet One’s modifications included an extra main rotor blade, changes to the tips on the main blades, and engine adjustments that allowed the pilot to slow the main rotor speed, making the blades quieter […]. The helicopter also had extra fuel tanks in the rear passenger compartment, an alcohol-water injection system to boost the Allison engine’s power output for short periods, an engine exhaust muffler, lead-vinyl pads to deaden skin noise, and even a baffle to block noise slipping out the air intake.

The extensive alterations did not blank out all noise, Taylor says. Rather, they damped the kinds of noise that people associate with a helicopter. “Noise is very subjective,” he says. “You can reduce the overall noise signature and an observer will still say, ‘I can hear it as well as before.’ It’s related to the human ability to discriminate different sounds. You don’t hear the lawnmower next door, but a model airplane is easily heard. It has a higher frequency and seems irritating.”

It also explains that some Quite One’s modifications can be found on later choppers:

“The agency got rid of it because they thought they had no more use for it,” says Glerum. At least one of the ex-Quiet Ones surfaced years later at the Army’s Night Vision & Electronic Sensors Directorate in Fort Belvoir, Virginia.

But according to the participants, no more were built. It’s puzzling why the CIA did not keep a stable of Quiet Ones, at least while the technology remained under wraps. And it remained a secret for more than two decades, until Ken Conboy and James Morrison told the story in their 1995 book Shadow War.

But there were valid reasons for dropping the Quiet One from the spymasters’ catalog.

“In the long run, the 500P was not the best for setting wiretaps,” says Casterlin. “It was not good for high-altitude work.” It was a light helicopter and had to be loaded with gear that cut into its payload capability and operating altitude. The Twin Pack was much louder but also simpler to run and more powerful, so Air America used it for later wiretap missions in North Vietnam. At least one tap, placed on the night of March 12-13, 1973, was successful.

Some of the Quiet One’s innovations did show up on later helicopters, including the Hughes AH-64 Apache, which has a scissor-style tail rotor. And Hughes engineers’ interest in modifying the tips of the main rotor blades to cut the slapping noise caused by blade vortices has been taken up by other experts. Aerospace engineer Gordon Leishman and his team at the University of Maryland, for example, are developing a blade with curved tubes at the tip to divert the air, thereby countering vortex formation. But, thanks to its many unusual modifications, the 500P still holds the title that Hughes gave it in April 1971: “the world’s quietest helicopter.”

Update, Aug. 25, 2020: Indeed, it looks like the “Night Stalkers” converted two MH-6J helicopters to NOTAR (No Tail Rotor) configuration: as the fan is enclosed in the tailboom, tail rotor noise, the major source of noise from most conventional helicopters, was significantly reduced. The two MH-6s were painted matt black during the period they were tested in NOTAR configuration. However, they failed to meet the requirements converted to standard Little Bird config and put back into service as MH-6Js. You can read the whole story and also find the photographs in this exclusive feature here.

The Enigmatic SR-72 And the Palmdale Sightings: What Do They Tell Us About America’s Secret Hypersonic Program?

The Media is Full of Speculation, But What Do We Know and What Can We Predict? One of 2017’s biggest defense and aviation stories is the anonymous sighting by a “handful of witnesses” of the […]