On May 22, 2011, the US Navy Flight Demonstration Squadron was performing at Lynchburg Regional Air Show, Va, when the diamond formation went too low at the end of the “Barrel Roll Break” maneuver. As a consequence of the lower-than-normal maneuver, the Blue Angels aborted the show and all F-18s landed safely. Noteworthy, neither on the preceeding day’s rehearsals, for unknown reasons, the maneuver ended as expected with the break (to see how the maneuver should be performed have a look at the team’s website and select Maneuver 28).

The following video shows both the May 21 and 22 maneuvers.

Following the incident, the Blue Angels announced a safety stand-down and cancelled their next performances (so far, until mid June) for more practice at their home base Pensacola, Florida, and, on May 27, team’s leader CDR Dave Koss resigned and was replaced for the duration of the season by Capt. Greg McWherter, who was the previous Blue Angels’ Commanding Officer.

The incident was obviously a Leader’s fault. He entered the loop too low causing the diamond four-ship formation almost to hit the ground as happened in 1982, when the whole Thunderbirds T-38 formation crashed killing all four pilots (even if in that case the cause of the crash was a mechanical malfunction with the #1 aircraft control stick).

Formation aerobatics requires specific qualifications, experience and training as it’s not easy to perform aerobatic maneuvers. When many aircraft (up to 9 elements) fly formation aerobatics, it is important not only to maintain the correct distance from one another, but also to maintain a very reactive flight attitude: who flies up front is required to anticipate wind gusts, turbulence, and the appropriate corrections, absorbing as much as one can the oscillations in order not to propagate them amongst the rest of the formation. Instrument flight is reduced to the minimum. The artificial horizon is utilised for no more than 20 or 30 seconds during the whole display, this being flown “visually”, looking out, maintaining one’s own position by sighting the specific reference points. For almost all the duration of the performance wingmen and slot pilots, have “only” to follow their leader, almost disregarding their position relative to the ground.

Formation leader is the role with greater responsibilities: he guides the whole team, ensuring flight safety, dictating timings and managing separations, opposition passes and rejoins. For this reason, formation leaders are the most experienced pilots flying in a team. However, even the most experienced pilots can do mistakes and when such errors occur during vertical maneuvers, consequences can be tragic.

In 2008 I was attending an airshow when a brand new NH90 helicopter of the Italian Army, piloted by an experienced crew, crashed into the Bracciano lake after entering a Fiesler maneuver at low altitude and, probably, suffering spacial disorientation caused by the surface of the water. 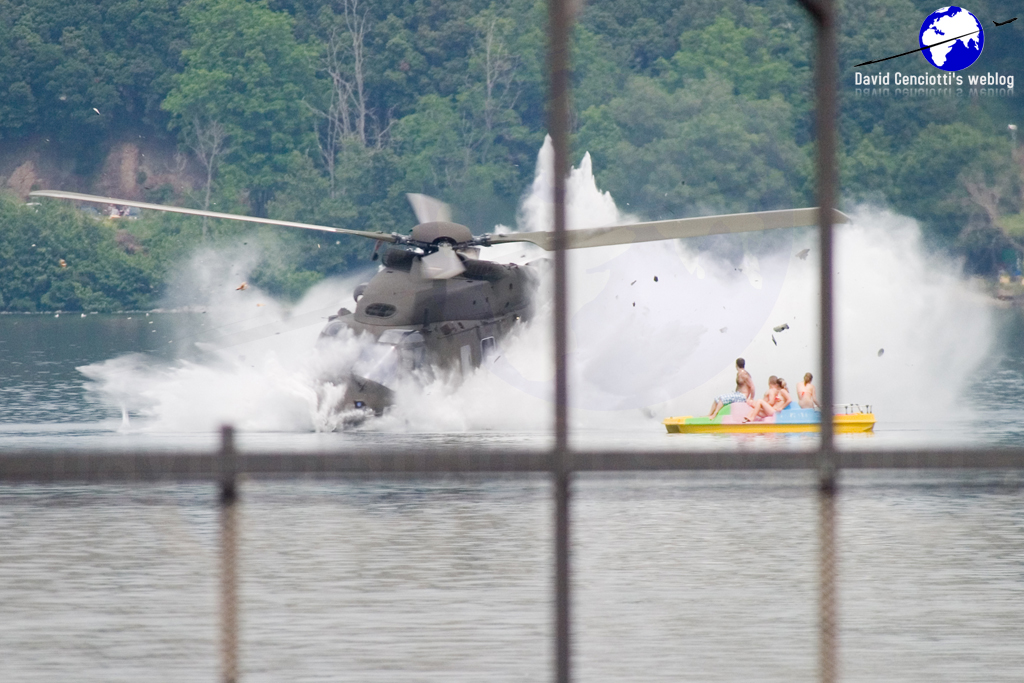 The above picture was taken on Jun. 1, 2008. For more info visit the NH90 crash page. Image is watermarked.

Who called the “Knock it off”?

After watching the footage of the Blue Angel’s almost crash, I’ve had the opportunity to discuss with blog’s visitors and Twitter followers, who might have called the “knock it off” (a radio call reserved for safety of flight issues used to cease maneuvering).

As already explained, the team Leader has the responsibility of ensuring the safety of the formation. Many teams (as the Frecce Tricolori) have a  Commander who issues instructions from the ground to the pilots in the air to fine tune timings and distances in the various manoeuvres, supervising the display both from a technical and a flight safety perspective.  However, in the Blue Angels the Flight Leader is also the Commanding Officer, hence, most probably, it was #1 who radioed the safety order to the rest of the formation. Nonetheless, there are some maneuvers in which other formation members have specific responsibility to cross check heights and distances and during the whole performance, and above all, #4 has a demonstration safety officer role, as he flies at the lowest position in the diamond, from where he has a overall view of the formation. Maybe #1 failed to recognize the dangerous situation and #4 called the safety breakout. Unfortunately it is impossible to determine it but it owuld be extremely interesting to know whether it was the Leader or the Slot or another team member to radio the “knock it off” as it would give us an idea of the formation’ situational awareness.

Even if it is not among his tasks, each formation member can radio a call for a safety issue but it is an extremely unlikely situation, unless the call is made to inform the rest of the formation of a failure involving a single aircraft. Unsolicited safety calls are extremely rare even if the could prevent a so-called “Controlled Flight Into Terrain” (CFIT) of the formation. Military aviation counts thousands episodes of CFIT with wingmen recognizing a potentially dangerous situation earlier than their flight leaders but delaying too much the call that would have saved both lives for extreme confidence in the flight leader and respect of hierarchy.

I don’t really know if this version of the Eurofighter Typhoon will ever become a reality. However, chances seems to be increased after Eurofighter received a quite surprising RFP (Request For Proposal) by the UAE […]