The sun was dropping quickly towards the Spring Mountains indicating the day was coming to an end. Aircraft spotters packed their gear and disappeared to their hotels for the night. Red Flag aircraft back from their afternoon sorties were parked in perfect order on the flight line and looked bedded down for the night. A relative silence dropped over Nellis AFB, only broken by a handful of non-flag aircraft that were now returning from their sorties, arriving in the final moments of twilight.

A small group of media under Air Force escort entering the flight line first passed the USAF Thunderbirds F-16s, parked with precision – just as they are flown. From a distance the flight line appears to have scores of fighter aircraft jammed together, but up close one quickly notes that everything is in perfect order.

Anxiousness to get as many photos as possible before the light faded is tempered by patience, as process takes priority. Our position on the flight line called in to “higher powers” and verified, we spill from the van with our chaperone – and to the F-15s of the 64th Aggressor squadron. As the sun fades, the moon appears – tearing photographers between aircraft and compelling lighting in opposing directions. 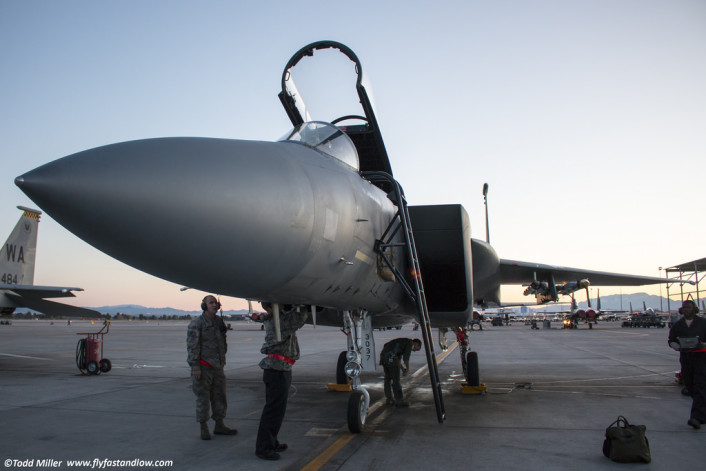 Among the F-15C Aggressors, maintenance crews were performing engine and system run-ups, assuring all would be in order for the night launch scheduled in about 3 hrs. In all likelihood the pilots had already assembled for their pre mission briefing elsewhere on the base. 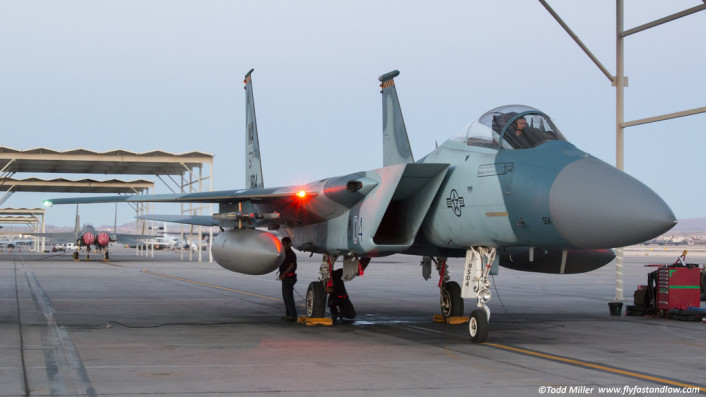 As regular observers know, there is always plenty of non-flag activity on the Nevada Test and Training Range (NTTR) and at Nellis AFB. A couple of F-15s return from a non-flag sortie, and taxi to their parking spot mere feet away. No waiting for a gate agent here, they are greeted by crew already in place, jumping into action to assist in the aircrafts shutdown and post flight inspection.

While portions of the flight line may be quiet, this is not one. Ground crews, maintenance groups and ordinance personnel are all busy addressing their responsibilities, the latter moving munitions trailers into place for the evening activity. As the sun sets, we are fortunate to capture F-16AMs from the Royal Norwegian Air Force (RNoAF) that look as though they are lined up on alert, all the pieces in place for a rapid scramble. Within a few moments, the moonlight illuminates the “Black Widows,” F-16CMs, from the 421st FS, Hill AFB. So many additional units and aircraft go unvisited – as time is passing far too quickly. 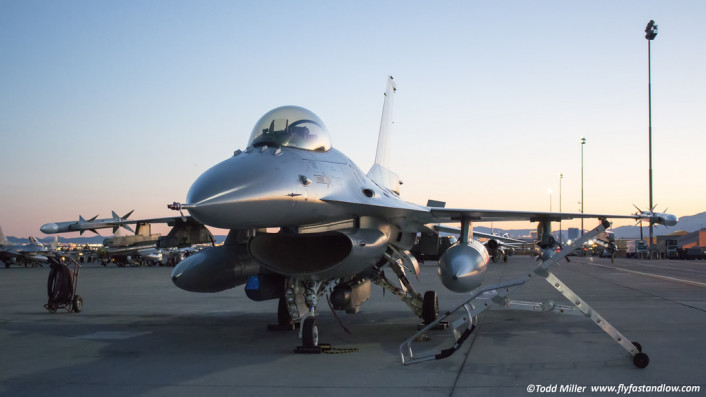 We move as quickly as we can about the flight line, but in all cases accountability is rightfully high. Our position is continually reported to base supervisors, and though we are escorted by uniformed personnel, we are stopped multiple times by base or unit security asking to see ID, and the official paperwork verifying approval. Patience and courtesy rule while radio calls are made, verifying we have the required approvals to set foot on this most secure ground. Fortunately, the Public Affairs office left no detail undone – and we are permitted to continue. One might think that once you have permission to enter the flight line – you’re in the clear, yet nothing else could be more wrong. Virtually everyone on the flight line takes responsibility for the security of the area, and rightfully so, it’s very serious business. 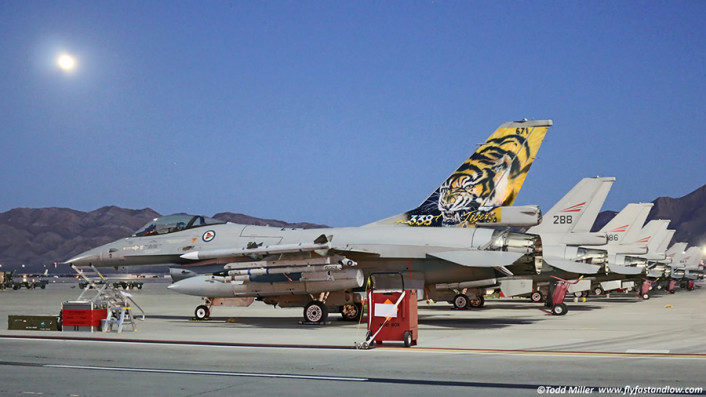 While flag aircraft seem asleep for the night, those landing go through a number of inspections. Pilots walk the aircraft, plane captains may be on site, or USAF Aircraft Maintenance Engineers and supporting specialized crew inspect each aircraft after landing to identify any issues that may require attention. Six F-18Es from the US Navy’s VFA-192 Golden Dragons return to base and taxi to their position. The initials “SSHWFGD” adorn the tail…. “Super Shit Hot World Famous Golden Dragons.” 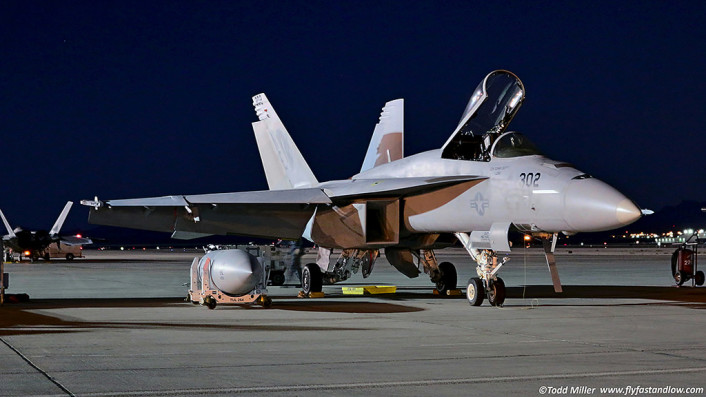 Another example of non-USAF units utilizing Nellis and the NTTR for their training purposes outside of Red Flag activity. A Naval Aircraft Structural mechanic inspects the F-18Es carefully so he may relay anything that requires attention to the plane captain and maintenance team to address in the morning. 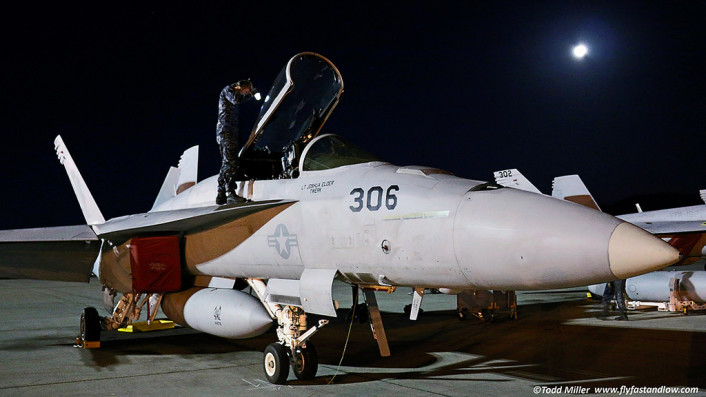 The process is impressive and consistent. Inspect aircraft before engine start-up, inspect thoroughly at the EOR (End of Runway) preflight, fly the sortie, return to base, inspect again. Nothing is left to chance, careful stewardship of the aircraft is part of the daily routine. 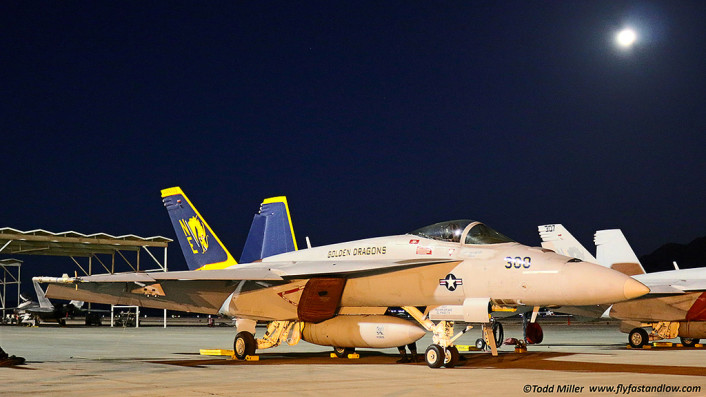 Near the EA-6B Prowlers from Marine Corps Air Station (MCAS) Cherry Point, NC a number of SH-60s are attended by crews and fire up, strobes flashing in the night. After a number of minutes what appears to be a team of Special Forces take their place inside, sliding the doors shut in preparation for lift off. A couple more minutes pass while crew members perform their walk around and like clockwork, the helicopters are launched. A young crewman passes by and informs me that it was one of the Seal Teams headed out to the NTTR for pre deployment training.

As launch grows closer we move to EOR and wait as the night cools dramatically. In the relative distance ground crew start to gather near their aircraft, and the white vans carrying pilots arrive. Anticipation builds. This is not a typical practice mission to build hours and keep skills sharp. This is Red Flag where pilots and crew have missions and objectives that will be contested on the “battlefield” of the NTTR. Every action taken will be reviewed upon landing and while there will be “winners” and “losers” all will be learners. It’s as close as they’ll get to going to war – without being in war.

Within a few minutes the noise of jet engines starting breaks the stillness of the night. It is an odd cacophony of sound, banging, even clanking like someone was smashing metal on metal that quickly turns to a groaning and growling finally increasing to an orchestra of constant whine as the engines move to idle. The smell of burnt jet fuel from the 75 or more idling engines fills the air – like a rich cologne to the aviation enthusiast.

The sign of good things to come, a mere couple hundred feet away on the runway, the E-3 AWACS, KC-135 tankers, and JSTARs roar past disappearing into the night sky. The surge of engines breaks the constant whine as F15s and F16s begin to leave their parking spots headed for their final preflight and ordnance checks at EOR.

B-52Hs, carrying any variety of lethal weapons inside taxi into place and roar down the runway disappearing into the night. B-1Bs follow, lighting their burners and with a tremendous roar that redefines power – blast by. The entire earth trembles, and it feels like my insides have been tossed into a blender. Absolutely fantastic! I scream, but no one can hear me – let alone myself. Burners aglow the B-1Bs remain visible for many miles as they climb away range bound. The night had been cool, and as a passing gift the B-1B raises the entire area at least a few degrees. We are thankful for the serendipitous gift of warmth.

60ft away 8 F-15s have lined up wing tip to wingtip for their final preflight and ordnance check. After idling during inspection they pull forward and turn, passing mere feet away, their engines like space heaters giving us one final shot of heat.

The launch picks up its pace as most the aircraft attempt to get in the air at roughly the same time for the exercise. Prowlers, Eagles, Falcons, and others roar down the runway, most (aside from the Prowlers) riding a rocket, afterburners like a propane torch on maximum flame. After scores of launches there remains but the whine of a handful of aircraft that are slated for late launch windows – likely entering the exercise on a specific Air to Ground sortie. 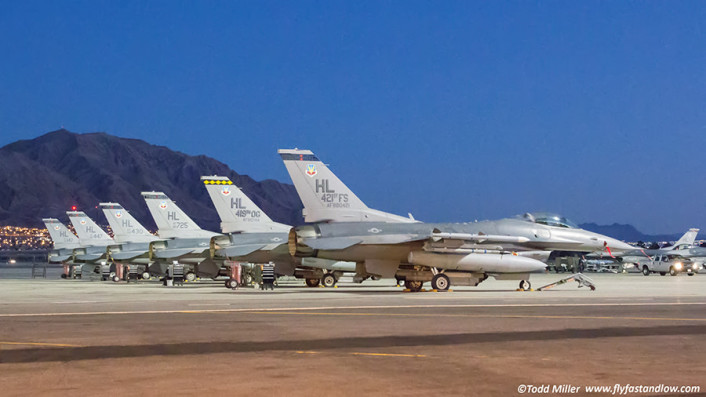 And then, suddenly the night is quiet, the moon illuminating the base that once again appears asleep. But it is an illusion. Nellis does not sleep, it only rests. Like the slow deep breathing one uses to catch their breath after a great exertion and as preparation for the next sprint. It’s another Red Flag at Nellis and for all the activity seen, like an iceberg, there is much greater activity by the compliment of units and support staff that keep it afloat. As much in life, the visible get the glory and honor, but nothing happens without the countless groups and specialties that work unseen on and off the flight line. Thank you for your service, and for the privilege of participating in it.

Warthogs have started carrying 2,000 lb bombs. You won’t find many photographs of A-10s with GBU-31s. The photographs in this post were taken from a 340th Expeditionary Air Refueling Squadron KC-135 Stratotanker during an aerial […]

Although it didn’t make it to something more than a test, the mobile ICBM concept saw C-5 carry and drop a Minuteman missile. In 1974, the U.S. thought that the best way to preserve its […]