64th and 65th Aggressors Squadrons challenge allied aircrews in the same way enemies would do in a real war.

The Aggressors have always been one of the highlights of the Red Flag exercises. Their presence and their way to play the adversary role to train coalition combat planes to deal with tomorrow’s air threats is one of the factors that make the drills held at Nellis Air Force Base, near Las Vegas, so realistic and useful.

The Aggressors were created to improve the proficiency of the U.S. fighter pilots following the high combat losses recorded during the Vietnam War.

Their role is quite simple: they have to threaten strike packages in the same way a modern enemy would do in a real war in order to train pilot react to their attacks and improve survivability during the first 10 missions at war (those when the risk to be downed is higher).

Noteworthy, the F-16s and F-15s of the Aggressors Squadrons replicate the paint schemes, markings and insignas of their near peer adversaries. Even if according to Lt. Col. Kevin Gordon, 64th AGRS commander, they don’t replicate a certain country’s adversary; rather, they “replicate a capability of various aircraft platforms to train our blue forces on how adversaries will employ them in combat.”

Still, taking to DVIDS website Gordon mentions the Su-27 Flanker (an aircraft spotted flying over Groom Lake) as the type of aircraft they replicate when attacking a Blue Forces F-15; as suggested by Lazygranch this may be the first time the Flanker is mentioned as an enemy aircraft.

“The exercise always starts out as a sparring partner, and [blue forces] don’t know what to expect,” says Major Eric Flattern, 57th Adversary Tactics Support Squadron and red force chief of adversary weapons, on DVIDS website. “We put one arm behind our backs and try to bloody their noses a little bit. It turns out blue forces are resilient because no one likes blood on their face. The good news is they are stepping up to the plate and actually moving forward throughout the week. Ultimately, it would be fantastic if they completely crushed us, but at the same time, it wouldn’t be fair if we went out there and made it easy for them every day.”

One of the things that the recent article on the U.S. Air Force website doesn’t highlight is the use of infra-red search and track (IRST) systems to perform passive detection of radar evading planes.

During Red Flag 13-3 this Author took the picture below showing an F-16 carrying a Lockheed Martin’s AN/AAS-42 targeting pod. This system, also carried by F-15E Strike Eagles, and equipping some other non-US combat planes as the Eurofighter Typhoon, lets the aggressor passively look for the emissions of the enemy fighter. 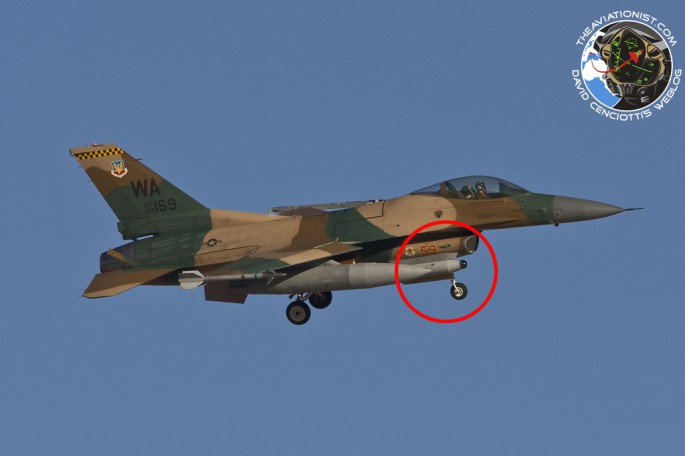 F-22s and other stealth planes have no (or extremely little) radar cross section – RCS – but they do have an IR signature. This means that they can be vulnerable to small, fast non-stealthy planes that leverage low observable coatings, no radio comms, no radar (hence with a limited RCS and with almost zero electromagnetic emissions) and use their IRST sensors, hi-speed computers and interferometry, to geo-locate enemy radar evading aircraft.

In other words, there are certain scenarios in which IRST and other tactics could eliminate the advantage provided by radar invisibility. Most probably the need to face this threat as well has been the reason why USAF has fielded IRST pods to Aggressors F-16s in latest Red Flags.

It’s hard to say how many aircraft the Ukrainian Air Force has lost. Some reports, especially those on the pro-separatists side seem to be a bit exaggerated but, as Ainonline website reported, on the basis […]