The “splinter” pattern is used to make the fighter jet to which it is applied similar to a Russian 4th and 5th generation aircraft.

Noteworthy, we have recently received an email from Gregory Slusher, a reader of The Aviationist, who explained in a really interesting email how the color scheme was “inadvertently invented” for U.S. Marine Corps F/A-18 Hornets.

“As a young U.S. Marine Sergent, me and my fellow corrosion control techs inadvertently invented the paint design,” Slusher explains.

“The squadron in question is F/A-18 squadron VMFAT-101 out of Marine Corps Air Station Miramar, California. The unit is a pilot training squadron and as such features quite a bit of air-to-air training. With the standard grey paint scheme, rookie Hornet pilots could not distinguish their targets from “friendlies.” My CO tasked our corrosion shop with creating and aggressive paint scheme that would help to aid the young pilots in target ID. It took us a few attempts, but we settled on a randomly placed collection of geometric shapes.”

So, the “splinter” color scheme was not introduced to make the jets similar to their Russian adversaries, just to make them more visible.

“Tail number 26 was our prototype, and is obviously not as angular. We were not completely satisfied. Tail number 34 was when we had really hit upon a formula that we and the command enjoyed. Tail number 12 was a desert variant and our favorite of the jets we painted. Initially we did not paint the radome since they are swapped frequently. Later, the shop gained the approval to paint them.” 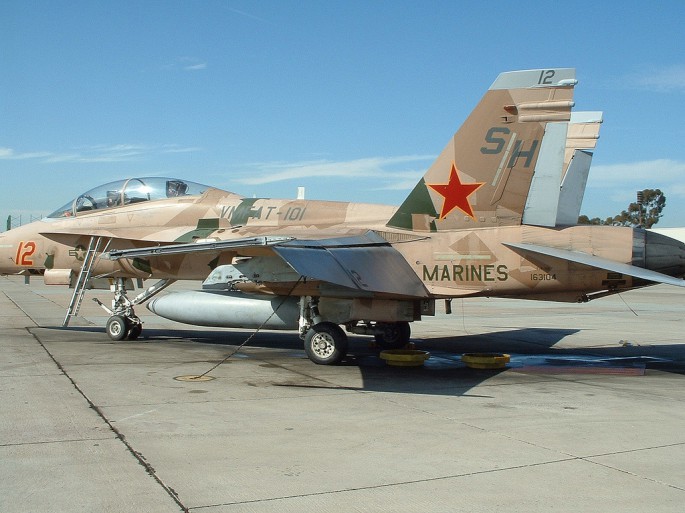 If you “google” VMFAT-101, you would see much of their work, as it has been photographed quite extensively at air shows, well before other services decided to apply a similar paint scheme to their planes.

Alone, Unarmed and Unafraid: how the USMC RF-4Bs performed the reconnaissance mission during the Vietnam War

The story of the risky recce sorties flown by the USMC Phantoms over Vietnam. The reconnaissance Phantom was initially developed in two different versions: the RF-4C for the U.S. Air Force and the RF-4B for the U.S. Marine Corps, […]

The F-35B was damaged by the explosion of the ammunition round leaving the aircraft’s GAU-22 gun pod during a nighttime mission out of Marine Corps Air Station Yuma, Arizona. An F-35B with VMX-1, the U.S. […]