Over the past 40 years the US Air Force-sponsored Red Flag exercise has established itself as the premier integrated air warfare exercise in the world.

The first of 2015’s 4 scheduled Red Flags is taking place at Nellis AFB from Jan. 26 to Feb. 13 with two mission windows (mid afternoon and early evening) flown each day. Each daily mission involves approx. 60-70 aircraft with each aircraft type representing a specific capability set utilized to accomplish the mission objectives.

Forces are divided in Red Air (hostile) and Blue Air (friendly). Red Air is primarily flown by the 64th Aggressor Squadron of Nellis AFB flying F-16s and F-15Cs painted colorfully, and trained specifically to use tactics representing hostile forces. In this particular Red Flag F-15Es from Seymour Johnson AFB, NC also mixed it up by representing strikers (ground attack) flying on the side of Red Air. 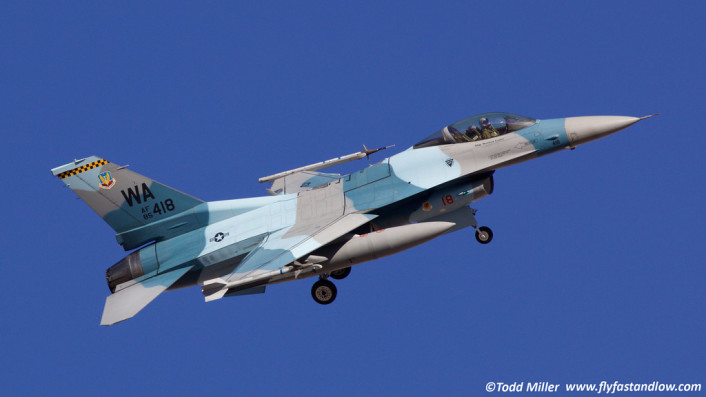 While Red Flag may have been seen in the past as an international air combat exercise, it is now much more. This exercise represents the cutting edge of training, and as such now includes unmanned aerial vehicles (UAVs), space assets, electronic warfare, the latest radar systems and cyber security threats. Every effort is made to simulate the known and anticipated tactics of a potential adversary. While difficult for the casual mind to conceive how all these threats are simulated, suffice it to say Red Flag integrates all threats and capabilities in a full on simulated war environment for the war of today and tomorrow. Blue Air receives specific mission objectives to achieve in this dynamic, high threat environment. 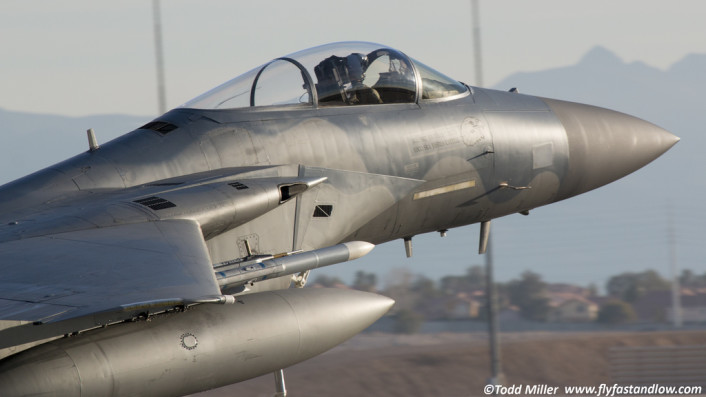 Red Flag 2015-1 included US Air Force, Navy, Marine & Air National Guard units, as well as Participation from the Royal Air Force (RAF) and the Royal Australian Air Force (RAAF), a roster of participating aircraft and units is available here. While many of the aircraft roles are understood, Flight Lt Andrew North, 1 Air Control Center, RAF Scampton, noted that the RAF Typhoons flew primarily in the “Swing Role” carrying Paveway 4s with the objective to fight their way in, drop their ordinance, and fight their way out. 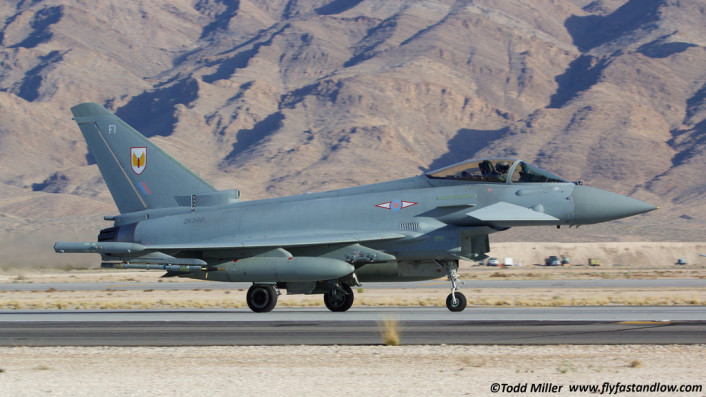 This is not the first time the RAF Typhoons have carried the Paveway 4s, but it is a recently added capability. The RAF Typhoons also worked on tactical integration with the F-22 Raptors in Air to Air combat versus the Red Air forces.

B-2 Pilot, Captain Brandon “Bloc” Bond, 393rd Bomb Squadron, Whiteman AFB noted that the B-2s were configured to carry virtually any capable weapon (non-nuclear) in their inventory – all the way up to the Master Ordinance Penetrator, the Bunker Busting 30,000 lb GBU-57. 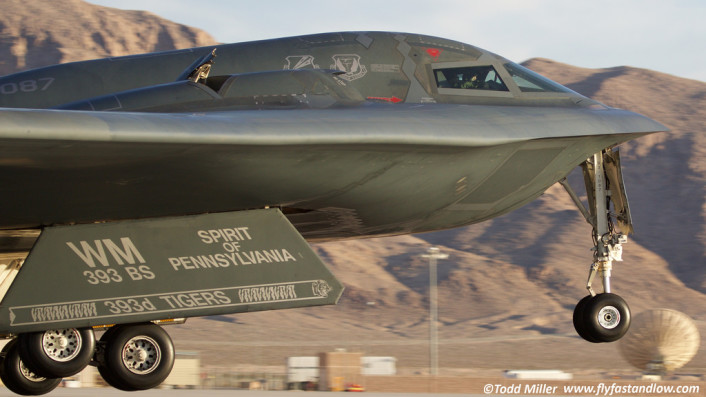 With two B-2s in the air, a wide variety of ordnance options were available to the Mission Commander to deploy on target, at any given time (though the B-2 itself dropped no live ordinance). Approximately 50% of the Air to Ground (A2G) missions were flown dry (no ordinance dropped) 25% dropped inert ordinance, and 25% of the missions dropped live ordinance on designated range targets.

The mission participation of the RAAF C-130Js was described by Wing Commander Darren Goldie, 37 Squadron RAAF, Sydney, as slipping under the fight to achieve mission objectives. While Red air and ground assets battle at altitude, the relatively large and lumbering RAAF C-130Js fly as low as 250 ft on simulated missions to insert Special Forces, or land on a dry lake bed/unimproved airfield to resupply forward ground units. 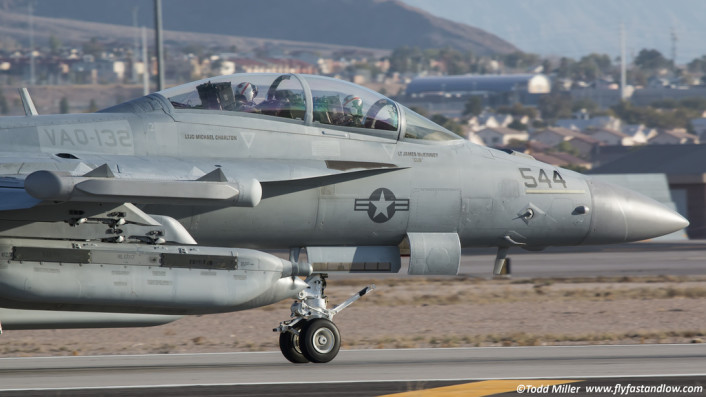 While the missions themselves may last only 90 minutes, the entire time spent in preparation, mission and debriefing equals about 12 hours. The debriefing includes real-time telemetry for review and provides an opportunity to learn from what tactics worked and what did not. The lessons learned in the Red Flag “battle” are taken back to be taught to non-participating squadron units and personnel.

The primary objective of the exercise is “asset & capability integration to achieve mission success.” As described by 1st Lt Paul Heins, Deputy Targets Chief, 547th Intelligence Squadron, Nellis AFB, “we want all participants to experience their first 10 combat mission sorties here at Red Flag, as it will increase their survivability tenfold when involved in fighting real wars.” 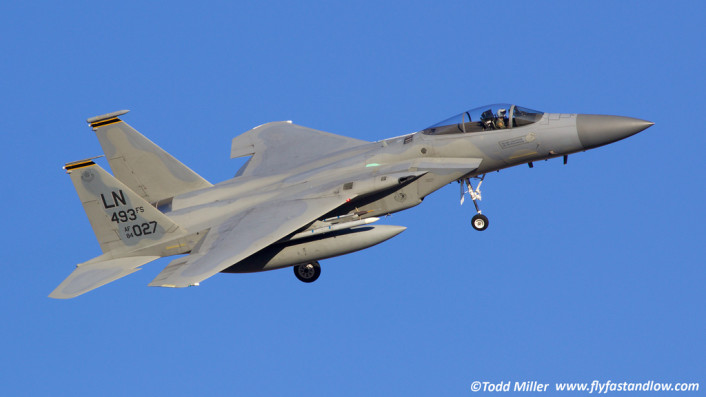 The integration and communication between units is a vital learned skill. This was captured by Airman First Class Johnelle Walker, 48th OSS Intelligence Squadron, RAF Lakenheath, who identified the greatest value of the exercise as integration, “From the first to the second week one sees the improvement in information sharing. Sometimes we are not beaten by enemy tactics, sometimes we beat ourselves by not sharing information and by not communicating effectively.” Red Flag teaches specialized units that each have unique capability sets to communicate and work together to achieve mission success.

While some question the cost and value of these exercises one can see them as parallel to a sports team holding “team scrimmages” prior to a championship game. Losing is not an option, and every good team learns how to take what may well be an international assembly of players with a wide variety of skill sets and through intense practice turn them into a championship team. In the case of Red Flag, the objective is to develop a championship war fighting machine. Red Flag ensures our military forces (including our coalition partners) are the best prepared, most capable, and ready forces in the world. 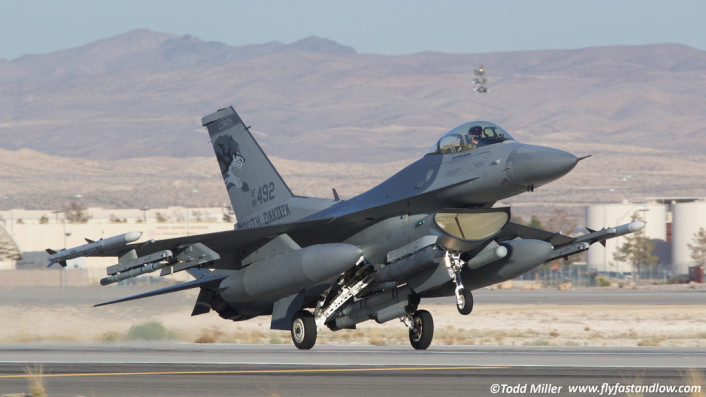 The squadron has now been relocated to Prince Sultan Air Base, Saudi Arabia, for the second part of the deployment. The 555th Fighter Squadron, also known as the “world famous, highly-respected” Triple Nickel, completed the […]

USAF Major Stephen Del Bagno, Thunderbird #4, Was Experienced Pilot, First Year Thunderbird. Update: a previous version of the story only mentioned the flyover at the Daytona 500 whereas the Thunderbirds have performed a display […]