The night operations have become a mainstay of Red Flag. Given most modern air campaigns begin with night operations, these Red Flag exercises are a valuable training opportunity for pilots and crews to safely experience a complex, coordinated exercise in the dark.

The U.S. Air Force’s Red Flag Exercise 14-3 took place Jul. 14-25 at Nellis Air Force Base, over the NTTR and adjacent airspace. Participants in 14-3 were primarily of USAF origins, with the exceptions of aircraft from the Republic of Singapore Air Force (RSAF) and a French Air Force C-130.

Having observed the exercise in daylight from areas near Rachel, NV, I determined to experience the night operations. Not a photo taking opportunity, I anticipated radio chatter, aircraft noise, and perhaps the ability to pick up some aircraft silhouettes if they passed by at low level during ingress or egress to/from the range.

Night missions usually include but are not limited to CAP (Combat Air Patrol), Interdiction, Deliberate and Dynamic Targeting, SEAD (Suppression of Enemy Air Defenses), and Combat Search and Rescue.

Nighttime in the Nevada desert is deathly quite and dark providing one with a spectacular view of the cosmos (with only slight interference provided by the lights of Area 51 and the town of Rachel). Given the proximity to Area 51, I can’t help but ponder what stories these night skies would tell if only they could talk. I could stay awake all night for that conversation! The impact of the cosmos and the solitude (helped by the lack of a wireless signal) moves me to ponder humanity’s aspirations – both noble, and misguided.

As the darkness deepens the solitude is broken by the radio chatter of AWACS, air-to-air refueling operations, tactical squadrons, and air-to-air chatter as the aircraft stage.

I am pleasantly surprised as the night permits a global sense of the exercise. The tankers that are unseen in daylight far to the east – are now clearly visible flying their tracks due to their navigation and anti-collision lights. It appears (for safety) all aircraft fly with their navigation lights illuminated and strike aircraft also utilize their strobes (their may have been exceptions).

As aircraft patrol overhead, their paths are easy to follow, and one can clearly see their afterburners kicking on and off as they maneuver. Flares illuminate the night sky, and strike aircraft make their way to designated targets at what appears to be medium altitudes. 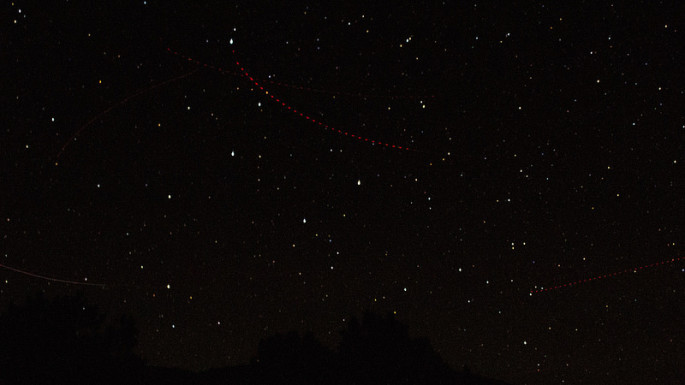 Sonic booms reverberate in the mountain valleys, and then a growing roar to the east forces my eyes closer to the horizon. Two strike aircraft in trail undoubtedly utilizing LANTIRN roar past a few hundred feet off the deck on range ingress, and a few moments later return on egress. Most probably an F-15E as the F-16s are no longer equipped with that kind of pod. 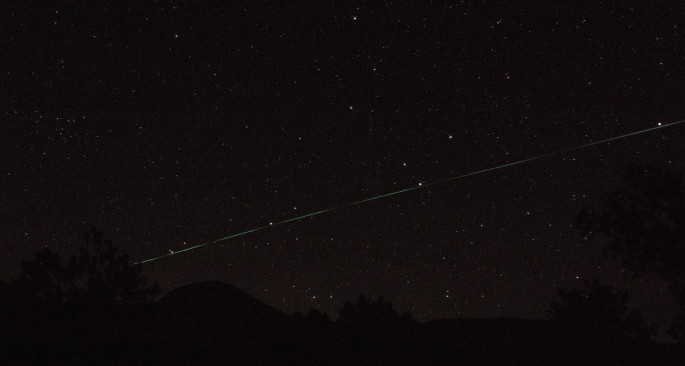 At medium altitude two B-1B’s in trail formation pass directly overhead with afterburners blazing as they accelerate on range ingress executing their attack. Some moments later on egress they return, flares deployed every few seconds as they disappear quickly to the east. 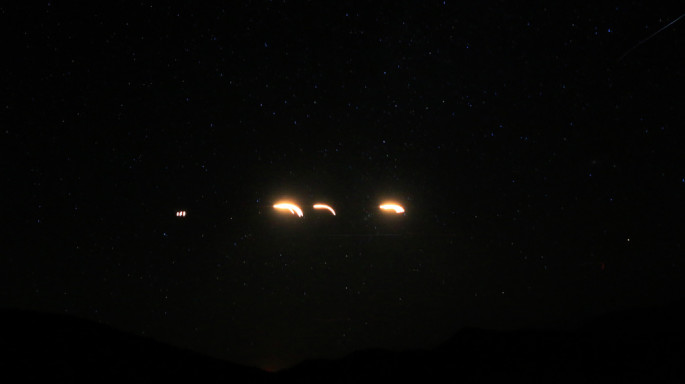 The 20 minutes of intense activity fades back to a high altitude dance with a few final aircraft flying CAP, and then the stillness of the Nevada desert takes back the night.

Buffeted by the desert wind, and with a final gaze at the cosmos I surrender to sleep hoping that the day will surpass the night.

A detailed analysis of a 510FS training mission at Ft. Irwin. On the afternoon of Feb. 24, The Aviationist’s contributor Eric Rosenwald photographed a flight of two USAF F-16C fighters as they practiced low-altitude strafe […]

The U.S. Air Force has moved more A-10 Thunderbolt attack planes to the “Arabian Gulf”

U.S. A-10s have arrived in Qatar to take part in regional exercises. Six A-10 Thunderbolts and more than 120 personnel assigned to the 190th Expeditionary Fighter Squadron have arrived to Al Udeid airbase, in Qatar […]

The new missile will complement the AIM-120 and AIM-9 in the Air Force’s inventory On Sept. 16, during the Air Force Association’s annual National Convention in Washington, Raytheon unveiled the mockup of its new Peregrine […]