According to Indian media an air exercise held ten years ago “highlighted the innovativeness of Indian fighter pilots, the impact of Russian jets and the potentially fatal limitations in USAF pilot training.”

Held at the Gwalior Indian Air Force range from Feb. 15 to 27, 2004, Cope India 04 exercise gained the headlines not only because it marked the beginning of a new chapter in bilateral relations between India and US, but also because Indian pilots were able to win more than 90 percent of the mock air engagements conducted against U.S. Air Force F-15C jets from 3rd Wing based at Elmendorf Air Force Base, Alaska.

The results of this joint training was surprising, somehow shocking.

According to the Pentagon, several limitations reduced the chances of victory of the Eagle drivers against the Indian fighters. First of all, the lack of the advanced active electronically scanned array (AESA) radar on their F-15s. Second, the air engagements typically involved six Eagles against up to eighteen IAF aircraft with no chance to simulate any beyond visual range (BVR) missile shot (due to the Indian request of not using the AMRAAM). Furthermore, the Indians had sent their most experienced airmen to fight against the Americans whereas the latter belonged to a standard squadron (hence there was a mix of experienced and less experienced pilots).

Anyway, regardless of the Rules of Engagement, the outcome of the engagement proved the skills and level of preparedness of the Indians.

As highlighted by Rakesh Krishnan Simha in an article published in Feb. 2014 on Russia & India Report, David A. Fulghum in its Cope India report for Aviation Week & Space Technology magazine quoted Colonel Mike Snodgrass, commander of the 3rd Wing as saying: “The outcome of the exercise boils down to (the fact that) they ran tactics that were more advanced than we expected…They could come up with a game plan, but if it wasn’t working they would call an audible and change (tactics in flight).”

Moreover even the Indian jets faced several limitations during the exercise.

IAF jets weren’t equipped with the AESA radar either and they were Su-30MKs, less advanced than the MKIs that the Indians  did not want to dispatch to Cope India. The Flanker wasn’t the only aircraft that the Eagle’s drivers faced in mock air-to-air combat: “The two most formidable IAF aircraft proved to be the MiG-21 Bison, an upgraded version of the Russian-made baseline MiG-21, and the Su-30MK Flanker, also made in Russia,” Snodgrass explained to AW&ST. Low radar visibility, instantaneous turn rate, acceleration and the helmet mounted sight combined with high-off-boresight R-73 air-to-air missiles were among the factors that made the upgraded MiG-21 a deadly adversary for the U.S. F-15s.

Cope India 2005 saw the U.S. Air Force deploy several F-16s that operated also mixed up with IAF Su-30MKIs (and not only against them). Nevertheless the results of the drills were much similar to those of the previous year, with Indian pilots able to win most of the engagements.

However according to Simha, the poor performance of the US aircrews during the exercise was also due to the old tactics used by the Americans during the air engagements who relied on the static Cold War ground-controlled interceptions which limited the pilots during the mock air combats.

But the 9:1 kill ratio achieved by Indians pilots against USAF fighters during the Cope India 04, was also reached thanks to their skills as USAF Colonel Greg Newbech said: “What we’ve seen in the last two weeks is the IAF can stand toe-to-toe with the best air force in the world. I pity the pilot who has to face the IAF and chances the day to underestimate him; because he won’t be going home. They made good decisions about when to bring their strikers in. The MiG-21s would be embedded with a (MiG-27) Flogger for integral protection. There was a data link between the Flankers that was used to pass information. They built a very good (radar) picture of what we were doing and were able to make good decisions about when to roll (their aircraft) in and out.” 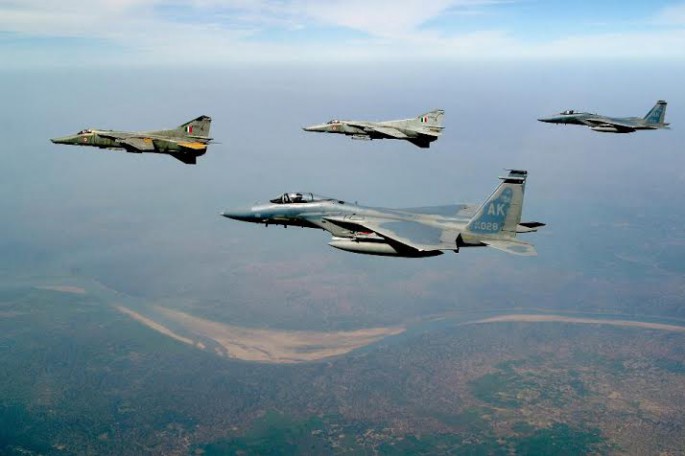 As reported by Scott Baldauf for CSMonitor, the same opinion is shared by Vinod Patney, retired Indian Air Force Marshal, and former vice chief of staff who said that the skills of IAF pilots combined with those possessed by Indian ground crews have been the real game changer during the several Cope India exercise editions since “..We’re not talking about a single aircraft. We’re talking about the overall infrastructure, the command and control systems, the radar on the ground and in the air, the technical crew on the ground, and how do you maximize that infrastructure. This is where the learning curve takes place.”

So, provided that the it went exactly as reported, was poor training the reason of the bad results achieved by US aircrews during Cope India exercises? Did the U.S. underestimate the IAF before the first simulated dogfights?

Maybe. For sure some lessons were learned.

When, in 2008, the Indians took part in Red Flag with Su-30MKI the results of the engagements leaked thanks to a video which surfaced on Youtube. Footage showed a U.S. Air Force pilot, Col Terence Fornof, lecturing an audience about the Indian Flankers with plenty of details about the poor performance of the Indian jets.

During his interesting speech, the F-15 pilots highlighted several shortcomings of the Indian Su-30s, including problems with the engines, FOD (Foreign Object Damage) procedures requiring 60-second intervals between takeoffs, poor performance in 1 vs 1 dogfights with the U.S. F-15s, to such an extent, after a few days, Indian didn’t want “any more 1 vs 1 stuff.”

Obviously, Fornof comments, are strongly denied on Indian side. Rightly. The U.S. Colonel is mistaken on some of his claims, including the engine of the Flanker and the radar of the Mig-21 and there is a chance he was playing to the gallery.

Most probably the truth lies somewhere in the middle.

Why do mid-air collisions between fighter jets occur?

“Two F-16C Falcon single seat aircraft, assigned to the 113th Wing, D.C. Air National Guard, were involved in a mid-air collision Aug. 1. The aircraft were on a routine night training mission off the coast […]

The F-117 saga continues. Two Nighthawks have landed at the Marine Corps Air Station Miramar outside San Diego. On Oct. 20, 2020, two F-117s have made a surprise visit to MCAS Miramar. Using their usual […]