Last month we praised the decision by the U.S. Air Force to give a modern Helmet-mounted cueing system to the F-22 Raptor pilots.

In fact, the fifth generation fighter plane was (actually, still is) the only one among the U.S. front line tri-service fleet to lack such an advanced piece of flight gear that projects aiming information through the pilot’s line of sight, enabling the aircrew to look out in any direction with the cueing data always in their field of vision.

However, the Visionix Scorpion helmet-mounted cueing system (HMCS), that would have made the F-22 capable to use HOBS (High Off Boresight System) air-to-air missiles as the AIM-9X, filling a gap against other current and future stealth planes in close air combat, will not be integrated into the Raptor.

In fact, as reported by Flight’s Dave Majumdar, next summer’s Scorpion technology demonstration was canceled by budget sequester-related cuts.

The cancellation of the helmet’s integration into the F-22 is just one of the effects of sequestration: seventeen squadrons belonging to the various U.S. Air Force commands were grounded or are going to operate at a reduced readiness level until the end of Fiscal Year 2013 as a consequence of budget cuts.

As already said, the U.S. Air Force as you know it, no longer exists: the problem is that sequestration is going to have an impact not only on the number of active squadrons but also on the pilots training and equipment. 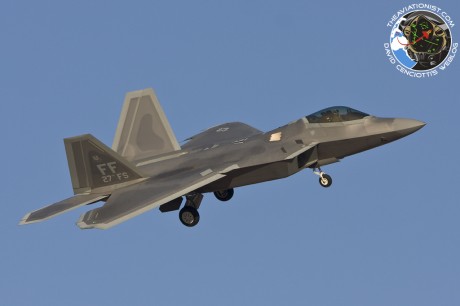 This rare video shows how the Northrop Grumman B-2 Spirit’s control surfaces move during checks carried out before taxi. In March last year, three U.S. Air Force B-2 Spirits, belonging to the 509th Bomb Wing […]

U.S. B-1 Lancers Continue Their “World Tour” With First Ever Mission Over Sweden

Ellsworth AFB’s B-1s flew yet another round-trip mission from CONUS to Europe. The BONEs (as the B-1 Lancers are commonly dubbed) have become the most visible heavy bombers in the U.S. Air Force inventory lately. […]

Although blurry, and taken from long distance, the footage seems to show a U.S. F-15E over eastern Iraq. Not only U.S. Navy planes and Predator drones are flying over Iraq. The following video, brought to […]