On Oct. 29, the Royal Norwegian Air Force had an interesting close encounter with Russian Su-34 Fullback jets on long-range armed patrol off Norway.

According to the Norwegian newspaper VG, that got access to the images taken by the RoNAF during the intercept mission off Finmark, this was the first time the Su-34s were observed and identified while flying in international airspace off Norway.

The photographs released by the RNoAF was taken by one of the F-16s in QRA (Quick Reaction Alert) at Bodo airbase and depict a Su-34 Russian aircraft carrying what looks like a single external fuel tank and two Vympel R-73 air-to-air missiles, shadowed by another F-16 carrying two drop tanks and two AIM-120 AMRAAM (Advanced Medium Range Air-to-Air Missiles).

According to Norway’s Joint Chief of Staff spokesperson, although the Russian air traffic in the Nordic region of Europe has been relatively stable for several years, the Russian planes are becoming newer and more advanced.

Indeed, even if it made its maiden flight in 1990, the Su-34 has been inducted into active service by the Russian Air Force beginning in 2012.

Noteworthy, the Su-34s were part of a large formation of 10 Russian planes which included Tu-95 Bear H bombers and Il-78 tanker aircraft launched from the Kola Peninsula: two Tu-95s skirted the British Isles and reached the Atlantic off Portugal, where they were intercepted by the Portuguese F-16s. 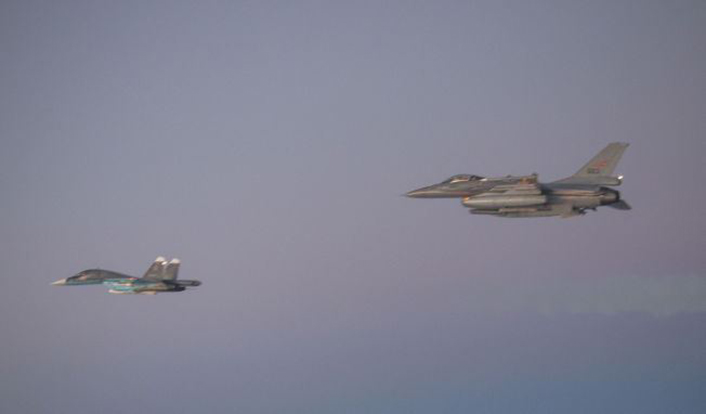 H/T Lasse Holmstrom and @geirfl for the heads-up

The five top stories of The Aviationist provide the readers the opportunity to virtually review what happened in 2017. Ordered by pageviews, the following 5 posts got the most reads and comments among the articles […]

One of the Tu-214ON aircraft used for Open Skies observations carried out a different type of surveillance mission near Crimea at the beginning of this month. The Tu-214ON (Otkrytoye Niebo – Open Skies) is a […]