Considered almost unbeatable in the air-to-air role, the F-22 successfully debuted in combat, taking part in air strikes against ISIS targets. But what if the F-22 found a 4th Gen. opponent?

Even though we don’t know much details about them, missions flown by the F-22 Raptor over Syria marked the combat debut of the stealth jet.

As already explained, the radar-evading planes conducted air strikes against ISIS ground targets, in what (considering the 5th Generation plane’s capabilities) were probably Swing Role missions: the stealth jets flew ahead of the rest of the strike package to cover the other attack planes, dropped their Precision Guided Munitions (PGMs) on designated targets, and escorted the package during the way back.

Considered that it could not carry external fuel tanks (to keep a low radar signature), the F-22 were refueled at least two or three times to make it to North Syria and back to the UAE, flying a mission most probably exceeding the 6 – 7 hours flying time.

Raptor’s stealthiness is maintained by storing weapons in internal bays capable to accomodate 2x AIM-9 Sidewinder missiles, some AIM-120C AMRAAM air-to-air missiles (the number depending on the configuration), as well as 2x 1,000 pound GBU-32 JDAM or 8x GBU-39 small diameter bombs: in this way the Raptor can dominate the airspace above the battlefield while performing OCA (Offensive Counter Air) role attacking air and ground targets. Moreover its two powerful Pratt & Whitney F-119-PW-100 engines give the fifth fighter the ability to accelerate past the speed of sound without using the afterburners (the so called supercruise) and TV (Thrust Vectoring), that can be extremely useful, in certain conditions, to put the Raptor in the proper position to score a kill.

All these capabilities have made the F-22 almost invincible (at least on paper). Indeed, a single Raptor during one of its first training sorties was able to kill eight F-15s in a mock air-to-air engagement, well before they could see it.

These results were achieved also thanks to the specific training programs which put F-22 pilots against the best US fighters jocks in order to improve their abilities to use the jet’s sophisticated systems, make the most out of sensor fusion, then decide when and to execute the correct tactic.

The Raptor has a huge advantage against its adversaries as demonstrated by the F-22’s incredible kill ratio against USAF Red Air (which play as enemy air forces during exercises) and its F-16s and F-15s, during the exercises undertaken in the last decade: for instance, during exercise Noble Edge in Alaska in June 2006, few F-22s were able to down 108 adversaries with no losses, while during the 2007 edition of the same exercise, they brought their record to 144 simulated kills.

In its first Red Flag participation, in February 2007, the Raptor was able to establish air dominance rapidly and with no losses.

As reported by Dave Allport and Jon Lake in a story which appeared on Air Force Monthly magazine, during an Operational Readiness Inspection (ORI) in 2008, the F-22s scored 221 simulated kills without a single loss.

Still, when outnumbered and threatened by F-15s, F-16s and F-18s, in a simulated WVR (Within Visual Range) dogfight, the F-22 is not invincible. 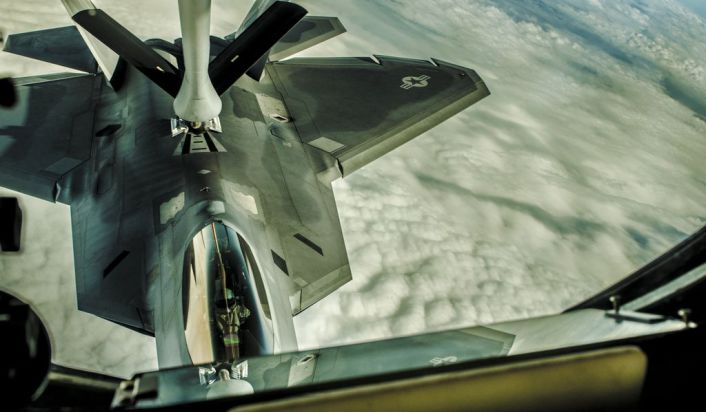 Apparently along with the Rafale, one aircraft which proved to be a real threat for the F-22 is the Eurofighter Typhoon: during the 2012 Red Flag-Alaska, the German Eurofighters not only held their own, but reportedly achieved several kills on the Raptors.

Even though with don’t know anything about the ROE (Rules Of Engagement) set for that training sorties and, at the same time, the outcome of those mock air-to-air combat is still much debated (as there are different accounts of those simulated battles),  the “F-22 vs Typhoon at RF-A” story, raised some questions about the threat posed to the Raptor by advanced, unstealthy, 4th Gen. fighter jets.

In fact, even though these aircraft are not stealth, Typhoons are equipped with  Helmet Mounted Display (HMD) systems and IRST (the Infra-Red Search and Track), two missing features on Raptors.

The Typhoon’s HMD is called Helmet Mounted Symbology System (HMSS). Just like the American JHMCS (Joint Helmet Mounted Cueing System) which is integrated in the U.S. F-15C/D, F-16  Block 40 and 50 and F-18C/D/E/F, HMSS provides the essential flight and weapon aiming information through line of sight imagery. Information imagery (including aircraft’s airspeed, altitude, weapons status, aiming etc) are projected on the visor (the HEA – Helmet Equipment Assembly – for the Typhoon) , enabling the pilot to look out in any direction with all the required data always in his field of vision.

The F-22 Raptor is not equipped with a similar system (the project to implement it was axed following 2013 budget cuts). The main reason for not using it on the stealth jet is that it was believed neither an HMD, nor HOBS (High Off-Boresight) weapons that are fired using these helmets, were needed since no opponents would get close enough to be engaged with an AIM-9X in a cone more than 80 degrees to either side of the nose of the aircraft.

Sure, but the risk of coming to close range with an opponent is still high and at distances up to 50 km an aircraft equipped with an IRST (Infra-Red Search and Track) system, which can detect the IR signature of an enemy fighter (that’s why Aggressors at Red Flag carry IRST pods….), could even be able to find a stealthy plane “especially if it is large and hot, like the F-22″ as a Eurofighter pilot once said.

Summing up, the F-22 is and remains the most lethal air superiority fighter ever. Still, it lacks some nice features that could be useful to face hordes of enemy aircraft, especially if these include F-15s, Typhoons, Rafales or, in the future, the Chinese J-20 and Russian PAK-FA. 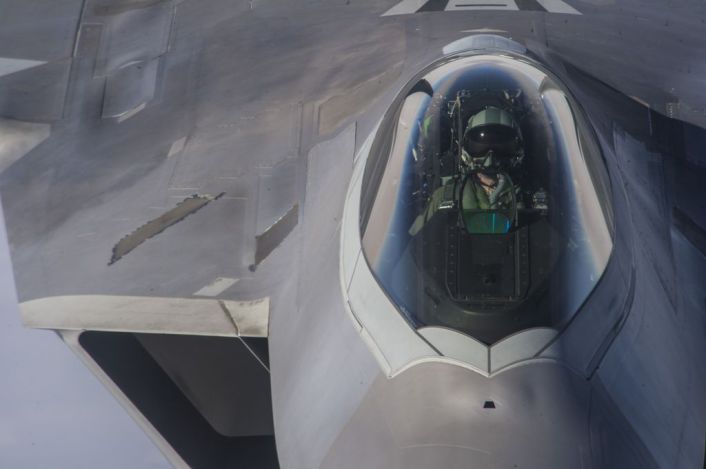 This Infographic Sums Up the USAF contribution to Operation Desert Storm