An interesting point of view: from an F-15E Strike Eagle Advanced Targeting Pod

The pod, equipped with a Laser designator used to guide LGBs (Laser Guided Bombs) and a FLIR (Forward Looking Infra Red) and CCD TV camera,  is used for identification of targets (both on the ground and airborne ones), tracking, coordinate generation, and guidance. 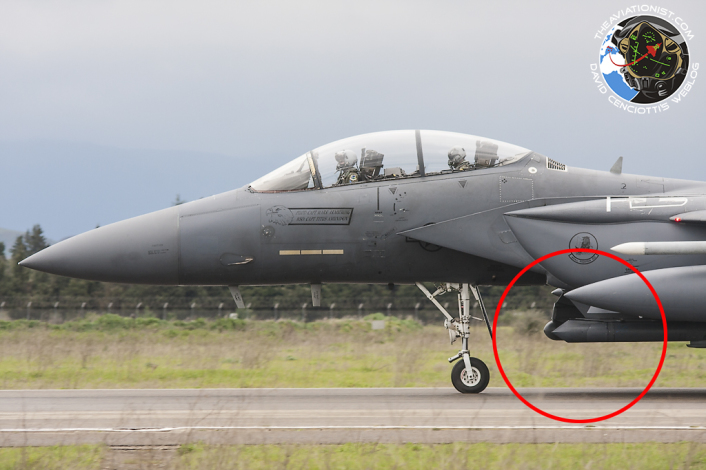 Although some videos recorded through the Sniper ATP are available online, here’s one released by the Pentagon showing an attack on an ISIL Compound near Kobani, Syria.

Blast aside, the symbology that appears in the ATP footage is interesting: target aside, there are a lot of symbols that we know nothing about, a result of the so-called “sensor fusion,” the combination of sensory data derived from the plane and other assets’ data sources.

Hornet Ball 2014: the best naval aviation video of the year

Once again, Hornet Ball is the best naval aviation video of the year. The Hornet Ball (Strike Fighter Ball Pacific) is an annual event consisting of all the West coast Naval F/A-18C Legacy Hornet and […]

This video of an F-15E Strike Eagle refueling over Iraq exposes an unusual loadout of 2,000 lb bombs

This is a quite unusual loadout: at least three GBU-31 bunker buster bombs. The footage below exposes something interesting. It shows a KC- 135 from the 340th Expeditionary Air Refueling Squadron, refueling F-15E Strike Eagles […]

Here is how an F-15E Strike Eagle from RAF Lakenheath went supersonic over Wales, UK, during air combat training with other aircraft of the 48th Fighter Wing. Courtesy of Plane Plotter you can now see […]