On Sept. 22, 2006 after 36 years of service, the last F-14 Tomcat was retired by its main operator, the US Navy, at NAS Oceana. Although six years have passed since then, there are many unknown facts to be told or simply to be remembered about the last Grumman’s (now Northrop-Grumman) fighter.

One of these often untold stories dates back to Apr. 2003 when, in the midst of Operation Iraqi Freedom (OIF), the Tomcats of the VF-154 Black Knights were embarked aboard the USS Kitty Hawk (CV-63).

During this shore-based period a VF-154 F-14A (BuNo 158620 callsign “Nite 104”) crashed because he suffered a single engine and fuel transfer system failure forcing the crew to eject.

However during this special period the five Black Knights’ crews were able to accomplish more than 300 combat hours dropping more than 50,000 lbs of ordnance.

These results were possible even if the Tomcat had some disadvantages when compared directly to some of the attack planes mentioned above: for example, the Strike Eagle has a maximum payload far superior than the one of the Tomcat and the F-14A could only employ Laser Guided Bombs (LGB) and it was not able to use Joint Direct Attack Munitions (JDAM) due to a lack of a digital databus (the Bs and Ds-models Tomcat could use JDAMs).

Still, the F-14 had also some advantages: the AN/AAQ-25 LANTIRN (Low Altitude Navigation and Targeting, Infrared, for Night) pod used by Tomcat crews was more capable than the USAF’s AN/AAQ-14 and also than the first AN/AAQ-28s Litening II. In fact the AN/AAQ-25 provided the Tomcat with the capability to point the pod to chosen waypoints without the employment of radar, an ability that the F-15E didn’t have. The F-14s were also equipped with a Programmable Tactical Information Display System (PTIDS) and 20 cm X 20cm screen that provided the Radar Intercept Officer (RIO) with a better display than the Weapons System Officer (WSO) in the F-15E.

All these features made the F-14 a really impressive attack platform- as a Tomcat driver once explained: “With the Strike Eagle you can put the bomb on the building. With the Tomcat you’ re putting the bomb into the third window from the left, from miles away”.

Dario Leone for The Aviationist.com 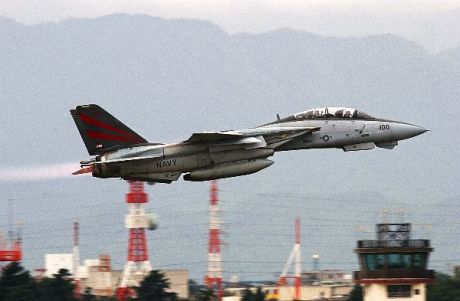 Graphic footage shows the massive ramp strike of a Tomcat in 1993. The footage below was filmed by the Pilot’s Landing Aid Television (PLAT) camera aboard Nimitz-class USS Abraham Lincoln (CVN-72), in the eastern Indian […]