The following short video shows a B-52 Stratofortress during a standard training mission of the War Week, an exercise which incorporates Aerial Refueling, Weapons Tactics and High Altitude Maneuvering.

The iconic bomber can be seen taking off, cruising, releasing simulated bombs, taking fuel midair from a KC-135 Stratotanker refueler and landing at Barksdale Air Force Base, Lousiana.

As some viewers have noticed with a bit of concern on Youtube, the B-52 used what appears to be the garden of a civil house as the target of its simulated bombing run.

Nothing special to be honest: in order to improve the skills they may need one day against actual ones, aircrews of U.S. and foreign attack planes can use civilian buildings, infrastructures located inside or outside training areas and gunnery ranges.

Buildings, bridges, highway passages can be used as simulated targets that a B-52 on a training sortie has to identify and attack using cruise missiles, GPS guided weapons, unguided munitions, mines and so on.

Until they don’t drop an actual bomb on them, civilians should not be too worried to be in the B-52’s Radar Navigator crosshairs. 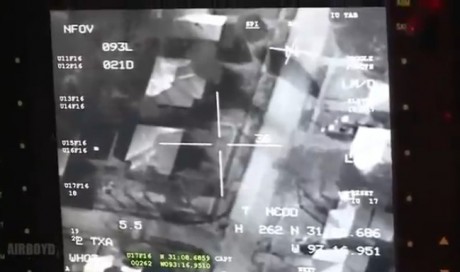 More than 60 years after it started to fly with the U.S. Air Force, the B-52 is still being upgraded.

The heavy bomber fleet will soon be equipped with the Sniper pod, that will enable a better integration with ground forces and provide improved precision in laser guided bomb air strikes.

“This pod gives a faster response time to our targets. What would normally take me 30 to 40 button presses in five minutes now only takes me a few seconds to actually target and drop munitions,” said Capt. Ryan Allen, 20th Bomb Squadron radar navigation instructor.

Furthermore, the pod has a greater visibility range and can feed live video to ground troops, to let them see what the Sniper pod sees.

The Sniper pod already equips fast combat jets as well as the B-1 Lancer, and with a software upgrade called Net-T (network tactical) it can be turned into a wireless router that can provide connectivity to ground troops on the battlefield.

The name, Red Hawk, honors the legacy of Tuskegee Airmen, and pays homage to their signature red-tailed aircraft from World War II. On Sept. 16, acting Secretary of the Air Force Matthew Donovan announced the […]