Even if WVR (Within Visual Range) contests made famous by Top Gun movie, are still the most exciting (and disputed….) part of a combat pilot’s training, future wars’ most likely scenarios are those played on the long distance.

BVR (Beyond Visual Range) set ups (1 vs 2, 2vs 2, 2 vs 4, and so on) is still what pilots have to be proficient at, if they want to survive super-maneuverable stealth fighters, outnumbering friendly planes. Indeed, U.S. Air Force, Navy and Marine Corps routinely fly against “Aggressors” or “Adversaries” (this one in the naval slang), whose aim is to simulate enemy tactics as those used by the Sukhoi Su-30s in combat and play the “Red Force” during large Red Flag exercises.

However, there are not enough opponents to give pilots the opportunity to improve their ability to employ their weapons systems against multiple bandits and maximize the training return. That’s why, USAF and Lockheed Martin have developed a new training system, dubbed Live Virtual Constructive (LVC) training technology, that is going to revolutionize combat pilots training: the LVC generates adversaries on the fighter’s sensors just like real enemy fighters that behave exactly how the real enemies would.

Hence, when a Wing wants to train four pilots, it would need “only” four planes since no additional aircraft is required: in accordance with the training purposes, they will have the opportunity to fight against eight to twelve adversaries, that would be controlled by instructors who can manage their tactics or virtually fly them from one of the cockpits in a Networked Training Center. Like the one at Luke AFB, where the new mission control system for F-16 LVC training was installed.

Obviously, such virtual, aggressors will have to be kept out of visual range.

The LVC would help greatly the F-22 Raptor units who have difficult time finding high performance aggressors to fly against, as well as F-35 squadrons, that are going to face similar problems in the near future.

Richard Clements has contributed to this article. 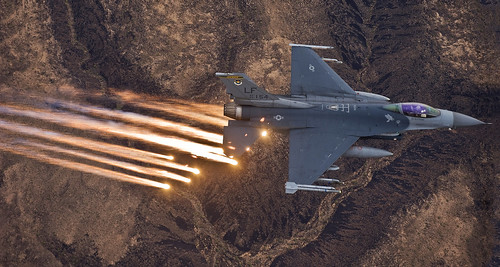 The jets flew from the U.S. to Vlieland Bombing Range in Netherlands, struck their target and landed at Volkel Air Base to take part in Dutch Air Force Days 2019 On June 13, 2019 two […]

This is how F-22 fighter pilots train to improve their air-to-air skills. The venerable T-38 Talon which first flew in 1959 (production ceased in 1972) has found new life as an adversary aircraft used to […]